Is there any discussion of C-3PO's poor design in the greater Star Wars canon?

For context, I was re-watching Empire Strikes Back recently (was pleased to see how well it still holds up) but what made the biggest impression on me this time around was how the wiring at C-3PO's waist is totally exposed.

My first thought was the design is intended to give technicians easy access to the wiring, but it seems like the downsides of making the wires vulnerable and the amount of dust and particulate that would certainly get inside of his carapace would massively outweigh any benefits.

Is this ever discussed in the greater Star Wars canon?

There is no official reason for why the 3PO droids were designed like that, but they were intended for use in controlled/indoor environments presumably, since they are protocol droids.

It is also largely unnecessary. C3PO was (re)constructed on a desert planet and ran around for 10 years or so without any plating at all with no apparent issues.

At some point, however, C-3PO fell into disrepair, and his vital components ended up in a junk pile on Tatooine. Anakin Skywalker, a slave boy from the Tatooinian city of Mos Espa, collected scrap parts and started rebuilding C-3PO so the droid would help his mother. Although protocol droids were normally designed for light duty in luxurious environments, Skywalker specially modified C-3PO so he could withstand Tatooine's sand and heat. C-3PO served Anakin and his mother Shmi by performing household chores. During his time with Skywalker and Shmi, C-3PO's wiring was left exposed since Skywalker was unable to outfit him with an outer covering.

So the exposure of his wiring is not a hinderance in any way.

Plus, any dirt gives them an excuse for an oil bath. 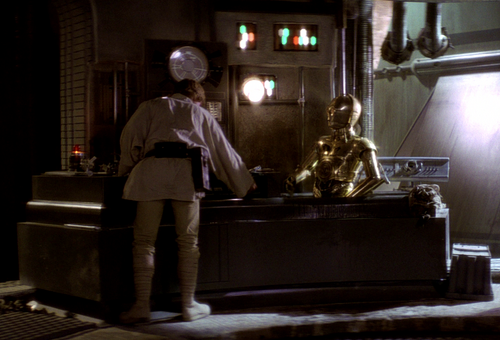 Not the answer you're looking for? Browse other questions tagged star-wars c-3po or ask your own question.