Is there any TARDIS driving system defined by the creators of the show?

In Doctor Who (I only saw the new series) we can often see Doctor do some strange moves with all the buttons, levers and screens. The only thing that is certain to me is that the big main lever is there for the start of transportation itself.

So I am asking:

Is there any system in driving the TARDIS?
I'm specifically curious whether the creators or the actors of the show understand what does what?
Has someone ever defined the purpose of each button?

Note that I'm looking for out-of-universe answers, and thus this is not a duplicate of this question because I am asking about the EXISTENCE of the system itself (and about authors knowledge of it). Linked question is asking if the Doctor is able to use it (if he knows how does it work and if the TARDIS obeys his orders)

This isn't the video that I referred to in my comment above (which I'm still looking for), but the video linked shows that the production designers wanted the main console to offer the Doctor different ways to fly the TARDIS:

So we made six segments, rather like there were six individual ways you could fly the TARDIS if you needed to. If one broke down you could go to another one, or one could do something a bit better than another if necessary. One's very mechanical, one's more sort of electronic, and there's a new cerebral feely-touchy one that will connect to the Doctor's brain when he touches it.

In this interview, production designer Edward Thomas talks about the design process of the new TARDIS. He refers to the idea of the console originally being designed for six users:

The idea was that there is nothing new about this [TARDIS, it was basically a collection of the things the Doctor had got over the years and there were modern things on there, because the thing is that the TARDIS doesn't recognize design, the TARDIS is an intelligent machine, it doesn't care if the buttons are all the same colour... it's not designed by somebody, it's becoming into being... My idea was that the TARDIS was originally flown by six people... I wanted the Doctor to feel like he's at the helm of a ship, so he had to run around, and pull buttons and levers and designed it in such a way that he could 'kick-this' and 'hit that'

That's become a tradition on the show - as the console design changes, certain buttons and widgets are assigned specific purposes. That's become all the more detailed as the show has gone on.

The six-sided design of the console was simply an aesthetic design choice. But as they were working on the 2005 series return, one of the set designers (see video in other answer) remarked to Russell T Davies that the console looked like it was designed to be piloted by six people. It made no sense for the console to be in a circle like that if one person was to be controlling everything.

RTD folded that into the new show - The Doctor's piloting style got a lot more chaotic and physical, racing around from panel to panel. And in Journey's End, they added that explanation into continuity officially, having all of The Doctor's friends take a console, and with a full crew, The TARDIS was able to tow the Earth back to its original position in space.

As before, specific panels and controls have very specific uses. For example, the Helmic Regulator, which has gotten a few callouts over the years, now resembles a bicycle pump.

Nowadays, the TARDIS console on the set has a user’s manual. The controls on each panel are specifically named, and each has a specific function. Matt Smith was given the manual and had to learn it. He had to learn a precise series of actions to launch or pilot the capsule “properly”. He wasn't just making it up. Presumably this was true for Capaldi and will be true for Jodie Whitaker

We can only pray we never learn the true use of the "Smurd" button. 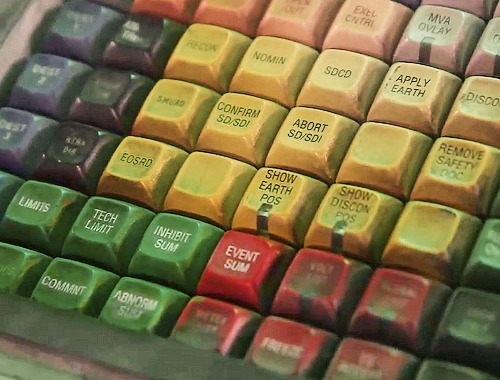 In-universe, the Doctor is regularly seen tinkering with the Tardis, making on-the-fly repairs and modifications as they're needed or as he desires. Given the jerry-rigged nature of the old girl, it's hardly surprising that the controls change between episodes.

Consider that while the Tardis is undoubtedly the most powerful and majestic vehicle in all of space and time, by Gallifreyan standards she's the equivalent of a patched-up old VW Beetle, held together with duct tape and polyfilla.

Not the answer you're looking for? Browse other questions tagged doctor-who behind-the-scenes tardis or ask your own question.

13
How much control does the Doctor have over the TARDIS?

20
Where's the extra TARDIS?
16
Does the Doctor choose where the TARDIS goes or does the TARDIS?
3
Time-Stream Crossing and Forgetfulness
5
How does the Tardis translate back?
12
Was the Doctor’s TARDIS inside Clara’s?
7
What powers the TARDIS?
1
What can cause the TARDIS to malfunction to the point of crash landing?