How do employees of the Ministry of Magic get paid?

Like Muggles, wizards do have to work or have some other source of income (family money, like the Potters and Malfoys). And every time we see a business transaction in the HP wizarding world, we see actually physical currency exchange hands.

How do large organizations, like the MoM, pay their employees? Do they get a sack of galleons every payday? Does Gringotts transfer the galleons from the MoM vault to the individual employees' vaults automatically? Is there a wizarding equivalent of a cheque?

Based on the fact that Molly Weasley needs to collect her pittance from the family's bank vault (when it could be easily, and more conveniently have been stored in a small snoke-skin purse at the family's home), it seems most likely that salaries are transferred directly from a central MoM account to the account/vault of the MoM employee.

The vaults were reached by means of small, goblin-driven carts that sped along miniature train-tracks through the bank’s underground tunnels. Harry enjoyed the breakneck journey down to the Weasleys’ vault, but felt dreadful, far worse than he had in Knockturn Alley, when it was opened. There was a very small pile of silver Sickles inside, and just one gold Galleon. Mrs Weasley felt right into the corners before sweeping the whole lot into her bag. Harry felt even worse when they reached his vault. He tried to block the contents from view as he hastily shoved handfuls of coins into a leather bag.

Harry Potter and the Chamber of Secrets: CHAPTER FOUR — At Flourish and Blotts

As far as cheques are concerned, we see at least one example of these in Harry Potter and the Half-Blood Prince, albeit from a distance where it couldn't possibly be read on screen. A copy of the prop made its way into the Limited Edition boxset.

And again in the same film, the Quibbler subscription form makes mention of both Gringotts Cheques and Postal Orders, another form of promissory note. 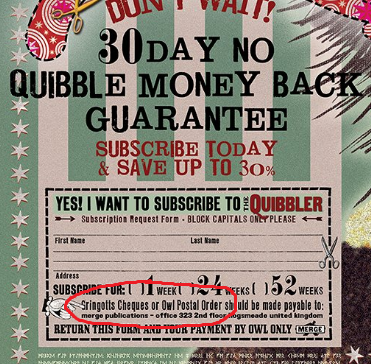 Not the answer you're looking for? Browse other questions tagged harry-potter money or ask your own question.