Did the heroes in "Rogue One" bump into Ponda Baba and Cornelius Evazan, from the Mos Eisley cantina?

In Rogue One, while on Jedha, our protagonists bump into characters that look very similar to Cornelius Evazan and Ponda Baba, the characters who bully Luke while in the Cantina on Tatooine. Is this a coincidence and a shout-out to the original trilogy, or are these mentioned to be the same characters in supplemental material?

Yes (but see below)

They're clearly intended to be the same characters, albeit traveling under their aliases of Roofoo (Cornelius Evazan) and Sawkee (Ponda Baba). They're positively identified in the Star Wars: Rogue One: The Ultimate Visual Guide as such. 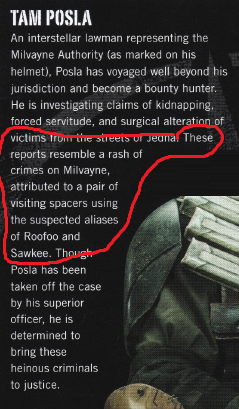 That being said, these aliases were only confirmed in a Legends source (the old obsoleted Star Wars Databank article on Evazan) so it's theoretically possible, albeit vanishingly unlikely, that these are two entirely different characters who merely happen to look the same.

They certainly match the appearance of those two, as well as having their generally unpleasant attitude:

Jyn brushed against a passerby, then felt a jolt as someone shoved her to one side. Her hand went under her jacket, sought her truncheon, as her assailant snarled, “You better watch yourself!”

Spoiling for a fight. Her gaze caught the man’s face—a barely human mien distorted from burns or scarring—and moved to a second individual—Aqualish, all tusks and bulbous black eyes—behind him.

That phrase about “watching yourself” is also very similar to the dialogue from A New Hope:

EVAZAN: You just watch yourself.

In addition, this source shows that an actor (probably Paul Alker) was listed as having played Evazan in Rogue One.

Curiously, the IMDB credits list a different actor (Michael Smiley) as having played Evazan. Either way, they agree that someone played Evazan in the film.

It generally seems to be a very intentional Easter Egg. We can’t be entirely sure, though, since Rogue One is not listed as one of their appearances in their Databank entries.

Not the answer you're looking for? Browse other questions tagged star-wars character-identification a-new-hope rogue-one or ask your own question.

6
How did Cornelius Evazan and Ponda Baba escape Jedha?

66
Why did Obi-Wan use his lightsaber in the Mos Eisley Cantina?
32
Why did Ponda Baba and Doctor Evazan in the cantina dislike Luke so much?
34
Does this cut material from Rogue One still appear in the novelisation?
6
How did Cornelius Evazan and Ponda Baba escape Jedha?
16
How did Luke and Obi Wan evade imperial troops in Mos Eisley Cantina?
5
Time between Evazan/Baba appearances on Jedha and Tatooine?
7
How did Cornelius Evazan get his facial scarring?
13
Blaster policy in the Mos Eisley Cantina?
3
Why didn't Obi-Wan offer an apology or pay for the mess at Chalmun's Cantina?