In the pilot episode of DS9, the station moves from its orbit around Bajor XI to the wormhole. I was reading a related question and contemplating just how difficult it would have been for DS9 to move. This got me to thinking of where the wormhole is located in the Bajoran system.

I'm making the educated guess, based on the close affinity of the prophets and Bajor in the overall plot, that it at a minimum orbits the Bajoran star or something that orbits the star. But what, exactly, is it in orbit around?

This is described in some considerable detail in the Star Trek Deep Space Nine - Technical Manual. In short, the wormhole orbits the local Bajoran Star (known as Bajor-B'hava'el) at an orbital distance of some 300 million kilometres.

The guide also offers a handy map in case you plan to travel there. The thick white line is the Denorios Belt, the thinner yellow line is the wormhole's orbit. 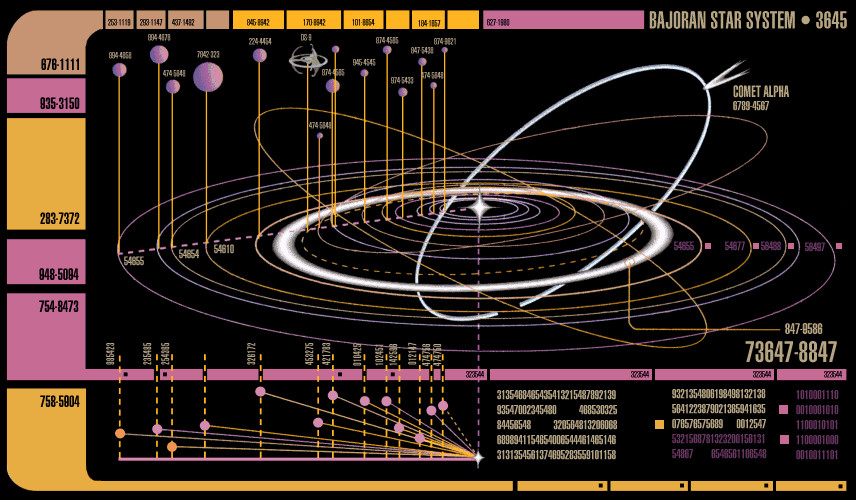 The wormhole terminus exists in the star system's distant plasma torus known as the Denorios Belt, some three hundred million kilometers from the sun. Bajor-B'hava'el.

The basic mechanics and properties of the wormhole have been studied thoroughly since 2369. when Deep Space 9 was first moved outward from its orbit around Bajor. It is known that the Bajor terminus moves with the Denorios plasma field in an orbit about the sun with a period of 13.5 years. The average orbital period of the belt is faster. 13.1 years, creating periodic density waves that can upset station operations. The orbital plane is inclined 38 degrees to that of Bajor. but only 11.5 degrees to that of the ecliptic created by Bajor IX. the largest gas giant planet in the system. Historical back-trace calculations indicate that the subspace inversion event each 50.23 years has been visible from Dahkur Province for at least the last thirty-five hundred years, and possibly as far back as thirty thousand years, with corrections for minor perturbations, axial precession, and tidal slowing.

The wormhole sits in the "Denorios Belt" between Bajor IX and Bajor X, which orbits the main star.

The Denorios belt was a charged plasma field located in the Bajoran system. This belt divided the system into an inner system and an outer system. It was located between Bajor IX and Bajor X.

35
How long would it take the Defiant to travel from DS9 to Earth (or vice versa)?
11
Why did DS9 need a Science Officer (pre-wormhole!)?
15
Why did it take 10,000 years to discover the Bajoran wormhole?
15
Story about terrorists that destroy wormhole and leave planetary system isolated from rest of galaxy
16
Does the Bajoran Wormhole have "Off-ramps"?
7
How long does it take to travel from one end of the Bajoran Wormhole to the other?
21
What happens to the ore-processing facilities of Deep Space Nine?
13
Why did Starfleet not attempt to make contact with the Prophets?
19
What's holding DS9 at the wormhole entrance?