Something that was very prevalent in the prequel trilogy was foreshadowing. Many things show a sort of evolution into the original trilogy. One that makes perfect sense is the portrayal of the Old Republic. Given that we see the Republic becomes the Galactic Empire in Revenge of the Sith, it makes sense that the Republic has many similarities to the Empire:

To name a few: 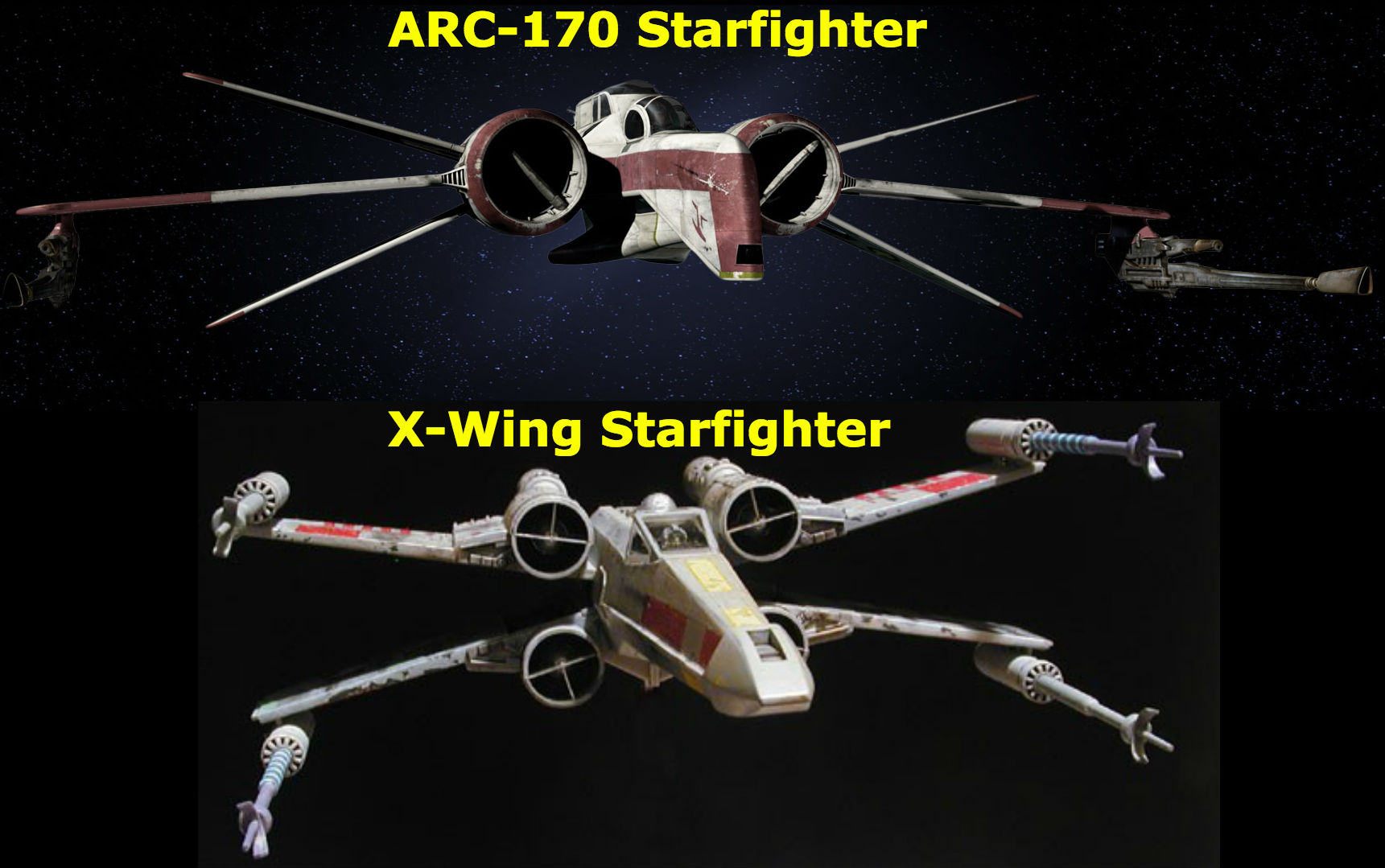 I mean, it is as if the filmmakers were trying to imply that the ARC-170 starfighter is some sort of predecessor of the rebel x-wing fighter, which seems to go against the Republic's trend of having things that evolve into Imperial things.

TL;DR: Why was the ARC-170 starfighter made to resemble the x-wing? Have the filmmakers commented on the decision? Is there some sort of backstory/retcon to explain why a rebel fighter would look like a descendent of the Republic/Imperial fighter?

They may have been made by the same company

It’s not particularly surprising that the fighters look similar, considering that they were produced by the same company, Incom Corporation. Apparently, Subpro also produced some of the same ships, so we can’t really be sure that the design of the Arc 170 starfighters influenced the X-wings. It seems likely, though.

The ARC-170s were not in accordance with Imperial doctrine

More to the point, though, the abandonment of the ARC-170 represented a fundamental change in the fighting philosophy of the Empire, as compared to the Republic. The Republic relied on a small number of highly skilled pilots and soldiers (Jedi and clones). As such, a highly capable fighter such as the ARC-170 or X-wing made sense. By contrast, the Empire relied on a combination of highly expensive capital ships and incredible numbers of disposable TIE-fighters (and their equally disposable pilots):

The old Delta-7 Aethersprite was roomy by comparison, the ARC-170 luxurious. Things could have been worse, however. The Goliath could have been carrying a squadron of the new—and seemingly disposable—TIE fighters.

From the Empire’s point of view, there was no point in keeping the ARC-170s, with their expensive hyperdrive systems and deflector shields. Why bother, when you can just throw pilot after pilot at the Rebels in ships that cost the absolute minimum? By contrast, the Rebellion, with its relatively few, relatively skilled, relatively free-thinking pilots, would want to save every soldier they had, and so the design philosophy of Incom and the ARC-170s would seem very attractive. Thus the X-wings.

They were both made/designed by Incom. When the Empire took control they gave most of their shipbuilding contracts to Kuat Systems Engineering (a subsidiary of Kuat Drive Yards) and Sienar Fleet Systems. The X-Wing was designed to be the main starfighter for the Empire, but Sienar's TIE was chosen instead. The designs were eventually taken by rebel engineers and upgraded for Rebel use.

You also didn't mention the Y-Wing, which was used by the Republic, decommissioned by the Empire, then adopted by the rebellion.

The bulk of this is from the Rogue One Ultimate Visual Guide supplemented by Ultimate Star Wars.

Not the answer you're looking for? Browse other questions tagged star-wars spaceship the-rebel-alliance foreshadowing or ask your own question.

30
What's the rationale behind Rebel factions still having large capital warships?
10
How can S-foils (X-foils) help with heating in space?
14
Why did the Resistance use the Rebel symbol while the First Order didn't use the Empire's?
8
Where do X-Wing fighters—and similar small scale Rebel craft—dock to refuel and tune up when in space?
5
Why were shields on the Rogue One X-Wings not turned on or working?
26
Did any non-rebels regularly fly X-Wings?
3
Why did the First Order not use Interceptors as their primary starfighter?
5
Why did Imperial Star Destroyers not have any anti-starfighter weaponry?
19
How does R2-D2 — or any astromech droid — routinely get into and out of a T-65 model X-Wing in the timeline of the original trilogy?