What is the name of the series about human beings with genetically modified police women?

They speak English. I think the hair was dark brown and skin colour is white. The series starts with a genetically modified person being killed.

There is a female police force that has been genetically modified, possibly making them smarter( or something else). They were beautiful and healthy because of their genetic superiority.

The woman worked with the human cops. She's been a cop for personal reasons. Because she has a genetic superiority she could be lawyer or doctor like the others.

There was even a different name for the genetically modified people. The show was very good, but I forgot the name.

They had their own group. They even made fun of being a female cop. They asked why she become a cop.

Minka Kelly as Detective Valerie Stahl, another detective serving under Captain Maldonado, and a love interest for Kennex. She is a Chrome, a human genetically engineered for beauty, excellence and success. Other Chromes consider her choice of profession to be a waste of potential. 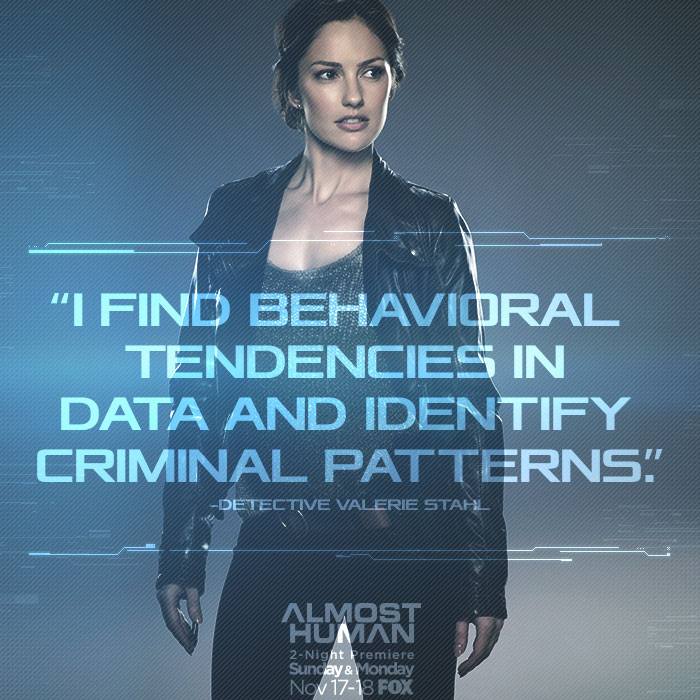 The first episode does not begin with the death of a Chrome, but episodes 10 and 12 of the series do:

Two "chrome" (genetically engineered) girls are killed by a new designer drug, which is related to a previous accidental drowning of another girl. Kennex and Stahl (a "chrome" herself) investigate the case, which leads them to the Mendel Institute, where many students, except two, are "chromes". When they find a sample of the drug, the pharmaceutical printer used leads them to a former Mendel Institute student, who acknowledges making the drug, called "Vero", but swears the printer was hacked to create the fatal doses. The clues finally lead them to the mother of the first girl—who had killed herself after taking Vero—and who hired the hacker for revenge. Meanwhile, Kennex uses drugs and a black-market Recollectionist doctor to try to remember more things about his traitorous ex-girlfriend Anna Moore and the ambush where he lost his leg, despite Dorian and Maldonado's warnings. He finally remembers a detail which leads him to discover his home had been bugged.

After a healthy chrome is reported to have died from natural causes, Detective Stahl suspects foul play. Upon further investigation, they find that the dead chrome has the DNA of seven other victims all with good looking facial features. Kennex and Dorian are called in to track down a serial killer (Michael Eklund) who has been using a nanobot surgical system to take facial features from his victims and transferring them to his face for the woman he loves, who he has been communicating with via online conversations (Only to learn upon meeting her that she is blind). Kennex makes a move and is about to ask Detective Stahl out for a drink, only to find out that he is too late.

However, Wikipedia's talk page mentions that Fox aired the episodes out of order, so it's entirely possible that you saw one of those first.

10
Anime about a cop with a robot partner and a rampaging tank
10
SF book from the 80's or 90's about a Space Cop who is made into a slave with a pain/pleasure implant?
10
What science fiction novel was about a murder mystery, involving androids, psychics, and auras?
8
Series: Female half-demon/half-angel paranormal P.I. sends demons back to hell
8
SciFi book - designer virus taken as party drug
9
Book about a DNA hacker who could customize people using animal DNA
12
Older Sci-fi book set in an 'Outlaw City'. Mute thief on a cold planet