Why do these Dothraki look calmer than expected?

Game of Thrones spoiler ahead!

Why do the Dothraki look calm in the ship?

In the final episode The Winds of Winter (S06E10), a short moment struck me, when we briefly see the Dothraki working in a ship. Here is the scene.

They look cool, working on their stuff like if they are used to it: 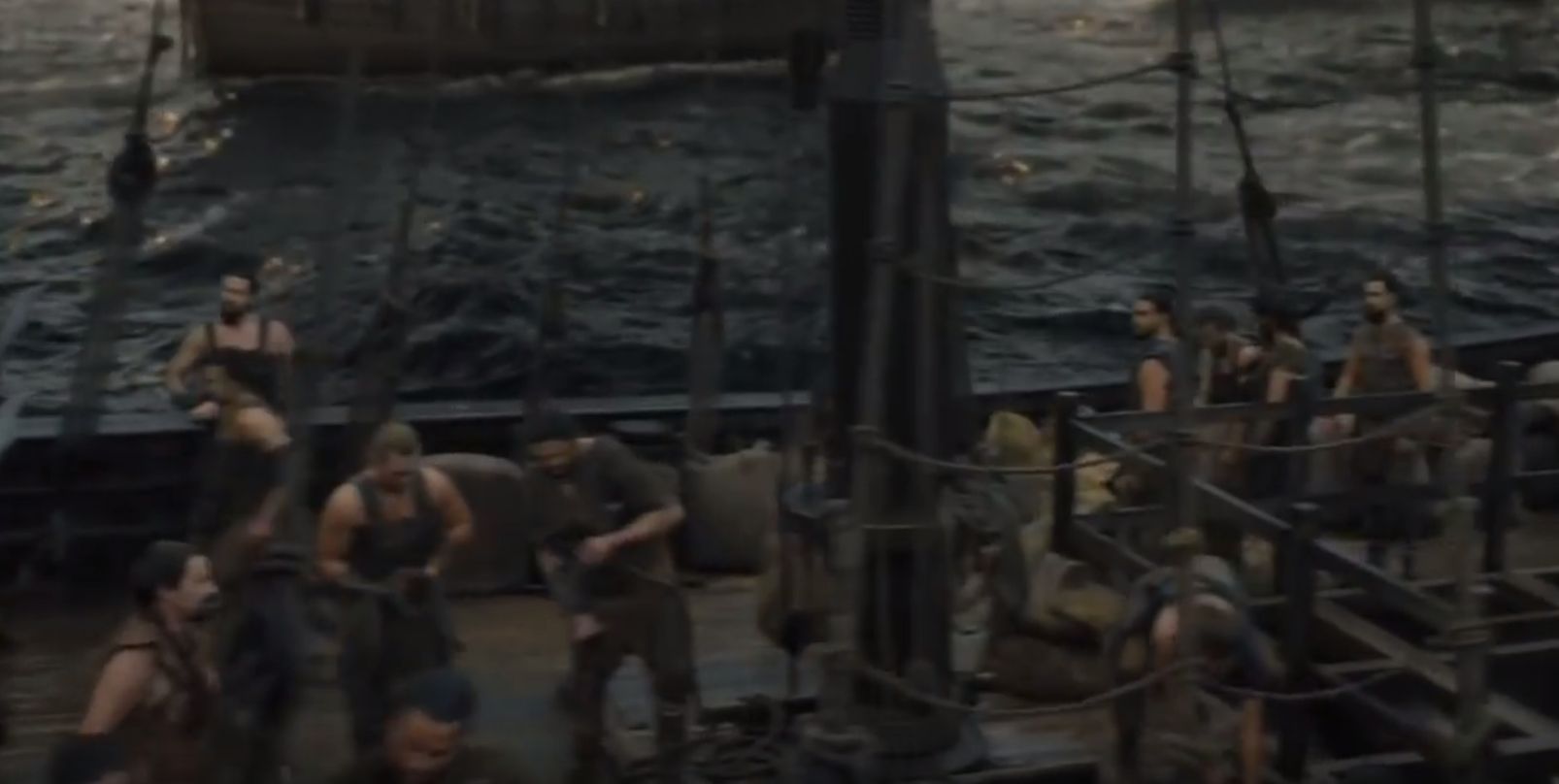 I would expect them to be hiding in the downstairs, or throwing their puke up all over like they did before, sailing to Astapor...

That scene doesn't feature in the books, where they are supposed to be more scared of sea water than death but I don't remember if this fear is mentioned in the show.

This isn't the only confusing thing about this scene - people also get confused about Varys suddenly turning up at the end. Half the answer to this I think is the same as to that - a heck of a lot of time has passed between this scene and the battle at Mereen (it'd be nice if they had communicated this more clearly than just having some sails in the fleet which, if you look closely, have Dornish and Tyrell sigils on them... but anyway...).

There's also a big difference between being the first of your people to ever do something, and the second. As Dany put it last time, when they were retching their guts out and were all depressed and stuff:

Don't mock them. They're the first Dothraki to ever be on a ship, and they followed me across the poisoned water. If they follow me, others will too, with a true khalasar

Last time, they were genuinely terrified, travelling over the notorious poisonous waters in a strange, rickety wooden horse, doing something completely alien to their people. This time, those survivors from the Khal Drogo days have been there, done that, and can set an example for the others.

It also helps that this time, they're part of a strong khalasar going to war, as opposed to last time, when they were aimless survivors: feeling down before they even got on the ship. As Jorah said in the same scene:

You'll have a true khalasar when you've proved yourself strong, and not before

And this time, they are a true khalasar with a leader who proved herself strong, riding to war like thousands of Dothraki have done proudly for centuries before them. They may be doing it in an unusual way, with wooden horses instead of horsemeat ones, but this new way is tried and tested now. By the time this scene happens, they've had plenty of time at sea to get used to it and (figuratively and literally) learn the ropes.

It'd be strange if this time, they weren't posing, acting tough, trying to out-sailor each other, competing to be the best wooden-horse rider in the army, mocking the weak who still struggle.

But yeah, it'd have helped if they'd made the massive time jump before this scene more apparent...

They were scared of the sea water but they would have travelled if their khal had ordered them.

“I will take my khalasar west to where the world ends, and ride the wooden horses across the black salt water as no khal has done before. I will kill the men in the iron suits and tear down their stone houses.”

A Game of Thrones, Daenerys

We also know that Dothraki men are proud and dont show their fear easily.

“On the day the three ships had lifted anchor at Quarth, you would have thought they were sailing to hell instead of Pentos. Her brave young bloodriders had stared off at the dwindling coastline with huge white eyes, each of the three determined to show no fear before the other two.”

A Storm of Swords, Daenerys

Again from the same chapter, we get to know that Dothraki panicked when the ship was stuck in a storm.

“When a sudden squall had enveloped them six days into the voyage, she heard them through the hatches; the horses kicking and screaming, the riders praying in thin quavery voices each time Balerion heaved or swayed.”

A Storm of Swords, Daenerys

We don't know how many days Dothraki men have spent on the ship. They might have been trained for few days to help around in the ship.

So putting everything together:

Dani ordered them to travel in the ships (wooden horse) and they have been trained a bit to help around in the ship.

We're now approaching the realms of the series leaving the book narrative. This goes hand in hand with smaller inaccuracies like Dothraki not spewing their guts out on a ship to a giant standing around rather useless in a battle because if he actually had a shield and/or a weapon the battle of the bastards wouldn't be an interesting thing to watch because he would just wreak havoc upon the Bolton soldiers.

As sad as it is, this is just an example of a growing lack of details. Don't get me wrong, GoT is still one of the best series ever made but things like that bother many fans not to mention other things like that noone ever uses shields properly, while in reality people would rather throw away their swords than their shields, especially against enemy archers (which is by the way something nearly all medieval-themed movies have in common).

14
How does Varys travel so fast?

8
Was Stannis expected to pay the existing debts of Westeros?
7
Why does Jaqen H’ghar still look like this guy?
57
The Dothraki cut their braids after defeat in battle, but when would a Dothraki be spared after being defeated?
4
Where do the Dothraki keep their weapons if not in the sacred city?
24
What happens if a Dothraki Khal goes bald naturally?
3
Who told the Dothraki to charge and why did it take so long before doing so?
3
Are Dothraki horses weakened by cold?
21
How many Dothraki are left as of Game of Thrones S8E5?
12
Why does the Night King look different than his cave paintings depiction?