This one is teasing at the edge of my brain. At the beginning of the story, a form of matter transmission is demonstrated to an elderly CEO, I think using a rabbit. The current flaw in the transmission is revealed when the rabbit appears as a gelatinous mass, sans skeleton, albeit otherwise perfectly functional and happy. For some reason, the CEO has to get to the moon (or maybe Mars?) in a hurry, possibly because he was being voted out by his board of directors, so he makes use of the device, loses his skeleton, but finds that it doesn't really impair him, and that he actually feels considerably younger without all of those bones to weigh him down.

I'm pretty sure that I read it somewhere between 2000 and 2010, but it sounds like one of those classic science fiction stories. I read it in a collection of stories, but I can't remember what else was in there.

I believe the answer is indeed Raymond E. Bank's "Rabbits to the Moon".

Here's a description from an article about teleportation mishaps:

Published in 1959, Raymond E. Banks’ “Rabbits to the Moon” echoes Sir Arthur Conan Doyle’s “The Disintegration Machine” (1929) in its depiction of the device as capable of distinguishing between different types of tissue. However, rather than Professor Challenger’s beard, in this instance it is the human skeleton that is left behind when a venal businessman is transmitted, rendering him a hideous blob. Proof that the divestment of impediments like style and characters allowing authors to concentrate on ideas doesn’t always work in a story’s favor, “Rabbits to the Moon” is nonetheless memorable for lampooning an approach that by the 1950s seemed thoroughly overused, along with lounge music and the pork pie hat.

And from an Amazon Review of one of the collections:

Reginald Goom of “Goom Looms”, manufacturers of traditional quality clothing, is facing a rebellious takeover by his Board who wish to move into space suit manufacturing 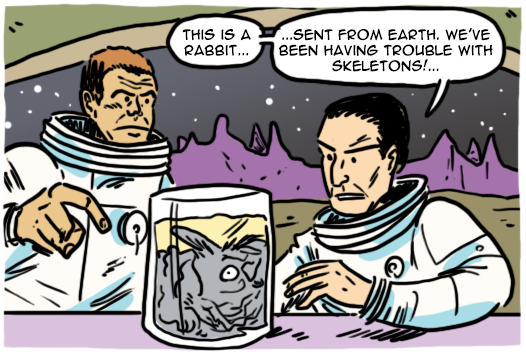 "Rabbits to the Moon" by Raymond E. Banks, is a story I found in the anthology A Decade of Science Fiction, stories selected by Robert P. Mills.

Mail from the mail moon rocket took two weeks to arrive and the teleportation device delivered skeletons two weeks after the rest of the body, so they were experimenting on rabbits. Lots of fun reading this.

Not the answer you're looking for? Browse other questions tagged story-identification short-stories teleportation or ask your own question.