Do the ponies of Equestria have non-exile space travel?

In the first story arc of My Little Pony: Friendship is Magic,

Luna returns from her 1,000 year exile on the Moon.

Is there any indication that the ponies of Equestria have access to space travel in any way, whether technological or magical, that they can use voluntarily to visit the Moon, another planet, or even another star system?

In season 5, episode 21, Scare Master, Rainbow Dash is seen wearing a costume that appears to be a space suit of some kind: 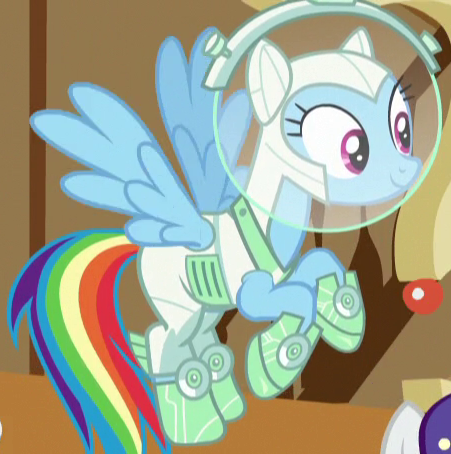 This suggests that ponies have at least dreamed up the idea of space travel, though it doesn't necessarily mean they have developed the technology or magic necessary to actually pull it off.

In the show itself there does not (as of season 6) appear to be any further, more compelling evidence that might suggest ponies have access to space travel.

In the officially-licensed comics however things are a bit different, as there is actually an example of magically-assisted space travel in the main Friendship is Magic comic series, Issue #6.

In this story Celestia magically lassos the moon, and she and Luna use their powers to pull it closer to the ground: 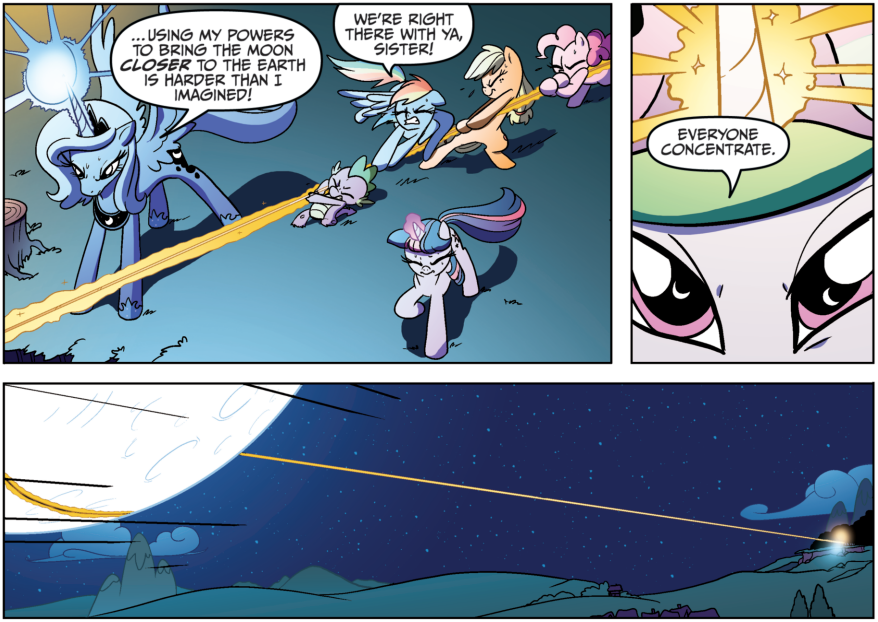 The main cast are then able to tightrope across the lasso in order to get to the moon (except for Fluttershy, Rainbow Dash, and Luna, who are able to simply fly there):

It's up to you whether or not you consider the comics canon.

I haven't kept up with the last two seasons, however, they didn't have any way to voluntarily visit the moon that I can recall. They were able to move through alternate universes, and there's nothing saying they can't visit planets or moons, after all, they have a spell that lets one travel through time.

Not the answer you're looking for? Browse other questions tagged space my-little-pony my-little-pony-fim or ask your own question.

19
What's the explanation for Luna's change in appearance?
30
Pony ages in My Little Pony: Friendship Is Magic
9
Are earth ponies represented in the government of Equestria?
36
If the ponies are vegetarian, why do they raise pigs?
2
Can multiple ponies have the same special Talent?
5
Who are the two yellow mares in the season 5 poster?
2
Is there a superhero who has notably super-strong teeth?
14
Do My Little Pony: Friendship is Magic ponies have coats?
7
Were Celestia and Luna born as alicorn?
4
Does Equestria have elections?