Why is Grimmauld Place's kitchen in the basement?

In the Harry Potter books and possibly the films, the kitchen for Grimmauld Place is located in the basement. Is it common for kitchens to be located like this in the real world London, or is something that was done specifically for Grimmauld Place? If so, what is the reason?

The house is a large, historic London town house with many rooms upstairs and several floors above the ground floor. The occupants we know of (the Black family) are certainly wealthy and believe in their own superiority.

Without casting any aspersions on their individual character or personality, most English people at the time who would have owned such a house would have had a similar view that they were in a superior upper class. (I am an English person with a qualification in History and a teacher).

As a result, cooking and food preparation would have been done by a staff, out of sight of the family, and brought upstairs to them for fairly-to-very formal mealtimes.

Therefore the layout of Grimmauld Place is perfectly in keeping for an old (I'm loathe to guess which period based on the information) London town house of such a size.

Note that the fact that the Order of the Phoenix often meets and eats down in the kitchen rather than taking it up to a dining room which surely existed is likely a sign of their modernity and disinterest in the Black family ideals.

A similar house showing a typical layout with servants living in smaller attic rooms and often working below ground: 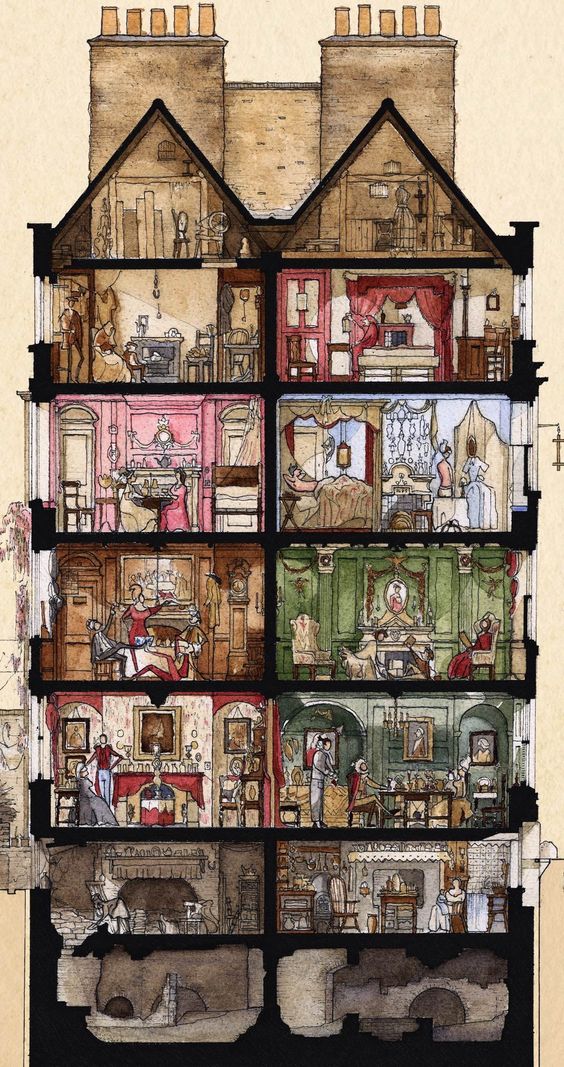 Why is the kitchen in the basement?

Knowing all this you can then plan for a better architecture and utilise this (bonus) that a kitchen can provide. you can build a parlour, a dining room or any other kind of room used during daylight hours and then save utilise the extra heat coming from a kitchen as a warmth source for that other room.

Having lived in rickety and porous buildings build in the 1950-1960 here in Denmark I can TESTIFY that if you live above a person that can't stand beeing cold than your heat bill will be much lower as you gain some of the heat from the person living below you.

Not the answer you're looking for? Browse other questions tagged harry-potter grimmauld-place or ask your own question.