Looking for a series (trilogy?) from about 1945-1965 involving undercover/rebellion. The only thing I remember was that one charcter was called "Diamond Lil" (not the comic character). The overall feel was rather like Asimov's adventures set on Trantor - decadent empire etc. Any hits?

I have long been fond of a space opera novel titled Star Bridge, co-written by Jack Williamson and James E. Gunn. It was first published in 1955 (which puts it exactly in the middle of the range you suggested). It does have some things in common with Isaac Asimov's Foundation books, now that you mention it. Here's a scan of the cover that was used on the edition I first encountered in the 1980s. 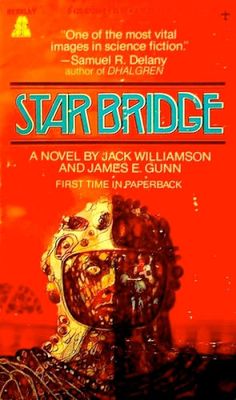 One world (Eron) is at the center of a mighty empire based on the ruling class possessing the great secret of near-instantaneous FTL (Faster Than Light) travel. This empire, called "the Eron Company," has become corrupt and tyrannical. (And I say "has become" only because I'm very generously giving it the benefit of the doubt regarding whether or not there had previously been a time when it wasn't nearly so bad!)

The hero, a man named Horn, recently a soldier on the losing side when Eron insisted upon conquering the free worlds of the Pleiades Cluster, is now associated with an attempt to overthrow the old regime and (hopefully) pave the way for a different and more enlightened system of government. In the course of his adventures, Horn assassinates the current "General Manager" (practically an Emperor) who has led the Eron Company for many years. Horn also spends time undercover during the novel, wearing stolen uniforms and assuming false identities at various times.

Occasionally we get interesting extracts of philosophical and historical analysis from a text being written by a mysterious figure who, for much of the tale, is merely referred to as "the Historian." (Similar to the way Asimov's Foundation stories would sometimes start a new section of the tale by quoting an excerpt from a relevant article of the Encyclopedia Galactica.)

One of the supporting characters in the tale is called Lil. She does not seem to use the name of "Diamond Lil," but she has a serious taste for eating diamonds from time to time. (I think she could eat various other things, but the crystallized carbon found in diamonds qualified as a real delicacy!) Lil turned out to be an extraterrestrial lifeform who usually, but not always, maintained the shape of a parrot that perched on the shoulder of a mysterious man called Wu. They sometimes bickered with each other when other people weren't supposed to be listening.

Wu claimed that his dear friend Lil had been keeping him alive and healthy for an incredibly long time. In return, he stole things (diamonds, for instance) to keep her happy. I've always suspected that Wu named her "Lil" as a sort of joke, because her literal taste for diamonds reminded him of the phrase "Diamond Lil." (Which was originally both the title and the central character of a play written by Mae West in the 1920s, with herself cast as the leading lady when it opened on Broadway, of course.)

For most of the novel, Horn (the main viewpoint character) is never quite sure what to make of Wu and Lil. This was one of those stories which, in addition to a fair amount of action scenes and suspense, also had quite a bit of intrigue and mystery, with many things turning out to not quite be what most people thought they were, and important secrets gradually being uncovered by Horn and other characters associated with him.

This book was very much a one-shot; it didn't become part of a trilogy or longer series. (Which is a pity -- it was the sort of story that left me wanting more when I first finished reading it, probably over 30 years ago.)

So, allowing for imperfections in your memory, I feel this may be the book you were vaguely remembering. Even if it isn't, you might get a kick out of reading it! Heck, I suddenly realize I probably haven't refreshed my memory of it for, let's say, the better part of a decade -- maybe it's time to dig out my own copy again?

7
Fantasy novel about a warrior woman with a golden hand?
10
Book from the golden age about insect-like aliens pretending to be humans
22
Short-story about moving “cathedral” cities on a Mercury-like planet
15
Science fiction novel about an assassin's guild that claims to be apolitical (while doing the local tyrant's dirty work)
6
Identify horror trilogy from 80s… third book was about zombies
5
Name of 60s/70s American sci-fi TV series about “Central Control”
5
Help! Book with Double Headed Character Called Neds
9
Science Fiction Novel with the Word Diamond in the Title
15
Golden age young adult series with political shenanigans in space!