I read this book probably at least 10 years ago. All I remember about it is that it included Olympia or Olympus in the title (and possibly had winged people on the cover?), it featured Virtual Reality, and one of the main characters was in a wheelchair, but became a centaur in the VR world.

I remember loving this book, but I can't for the life of me figure out what it was! Help!

story-identification novel books
Share
Improve this question
edited May 18 '17 at 4:13

Could this possibly be Scott Somerville's Olympus? 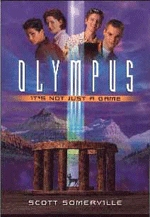 Like millions of others around the world, Karl Huber is crazy about Olympus - the new full-cyber-suit, multi-player, virtual reality game on the Internet - even though his father hates it. When Mr. Huber forbids his son to play the game in his house any more, Karl's jealous brother, Jacob, seizes the opportunity to tempt his twin to run away.

With trails leading in all directions, now he could be anywhere on earth. The only way to find Karl is to look for him in Olympus, where sinister forces are using high technology to build a world too fascinating for children to resist, and too profitable and powerful for adults to ignore.

It was published in 2000 (which I'm still aghast is over 16 years ago... that was when I was in college, dang it!). There's Olympus, virtual reality, and one of the reviews on Amazon notes (my emphasis):

However, something very sinister is going on. Mr. Huber and Jacob, with the help of the Mark, Nancy, and Noah, Sheila Morrison, whose husband designed Olympus, her son Simon, known as "Wheeler" because he is in a wheelchair, and an adult player named Peter Antipas, search for Karl. Since they can't find him on earth, they look for him in Olympus. But will they find him? And if they do, can they get him to come back?