What happened to the other designs of Captain America's shield?

In the past Cap. America has had both round shields and a shield that looks similar to the American shield. What ever happened to that second shield design? If that shield was destroyed how, assuming it is also made of vibranium? 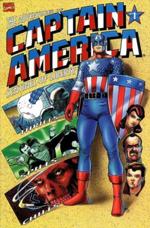 In his debut, Captain America (secretly U.S. Army Private Steve Rogers) is equipped with a triangular, badge-shaped shield made from a bulletproof alloy. After complaints by rival comic-book publisher MLJ that the design was too similar to that of its own patriotic hero the Shield,[1] Timely Comics replaced the triangular shield with a disc-shaped one.

While the origin and fate of the original shield were not described in the original comics from the 1940s, the shield's fate was revealed decades later in 2001 through a retconned story. According to the tale, King T'Chaka of the African nation Wakanda met Captain America in early 1941 and gave him a sample of vibranium, an alien metal with unique vibration absorption properties and found only in Wakanda and the Savage Land.[2] In response to this gesture of trust, Captain America gave his original triangular shield to T'Chaka,[3] whose son T'Challa would join the Avengers a generation later as the Black Panther and become a close ally of Captain America. The original shield still resides in Wakanda as a national treasure.

Upon his return to the U.S., Captain America received a second triangular shield that he used until given his disc-shaped shield, which was personally presented to him by President Franklin Roosevelt.[4] This second triangular shield would be kept in storage with Rogers' other personal effects after the war. It was recovered at some point after Rogers joined the superhero team the Avengers in The Avengers #4, and was kept at Avengers Mansion. It was destroyed by the supervillain Mr. Hyde during a raid on the mansion by Baron Zemo's Masters of Evil, and later "plucked from time" and restored by Zemo in Thunderbolts #105 (Oct. 2006). The shield (along with other sentimental items thought destroyed) were returned to Captain America. A third triangular shield is kept in the Smithsonian Institution. It was used by Captain America when he foiled a terrorist attack on the museum itself after the loss of his usual shield; it was then given to him in gratitude. This shield is destroyed several issues later by a Kree alien warrior.

The shield destroyed by Hyde and restored by Zemo was eventually passed on to Elijah Bradley, the teenage hero known as the Patriot and leader of the Young Avengers.

In 2010, the history of the original shield was revised. In the limited series Captain America/Black Panther: Flags of Our Fathers, Captain America, Sergeant Nick Fury and the Howling Commandos meet Azzari (grandfather of T'Challa) -- the Black Panther and king of Wakanda during World War II. Aided by Wakandan military forces, they successfully repel a series of Nazi assaults led by the Red Skull and Baron Strucker. During the battle, the Red Skull (wearing a battle-suit) crushes the triangular shield, and Captain America uses a circular vibranium shield provided by Azzari to incapacitate the Skull. The weapon serves as the inspiration for the circular shield that the super-soldier begins using upon his return to America, and the encounter marks the beginning of friendly relations between the United States and Wakanda.[5]