Do magic carpets exist in the Wizarding World?

Magic carpets, prominent in Middle Eastern literature, are carpets that have the ability to fly (or in some stories, teleport), allowing anyone on it to travel vast distances quickly. Do these exist in the Wizarding World of Harry Potter? There are broomsticks, which are objects that allow a person to fly, so I figure it would be feasible.

Yes. In Goblet of Fire, there is a reference to them being banned in England as they were deemed to be Muggle artifacts:

"I sent him an owl about that just last week. If I've told him once I've told him a hundred times: Carpets are defined as a Muggle Artifact by the Registry of Proscribed Charmable Object, but will he listen?"

"I remember my grandfather had an Axminster that could seat twelve -- but that was before carpets were banned, of course"

Magic carpets (or as they're called, "flying carpets") definitely exist in the Harry Potter universe. They are mentioned several times in Rowling's writings.

Although once popular worldwide, they have since been made illegal in magical britain and everywhere else besides for the Far East.

In the Goblet of Fire we first learn about them being currently outlawed in Wizarding Britain.

“Oh and I’ve been wanting a word with you too, Arthur,” said Mr. Crouch, his sharp eyes falling upon Mr. Weasley. “Ali Bashir’s on the warpath. He wants a word with you about your embargo on flying carpets.”

“I sent him an owl about that just last week. If I’ve told him once I’ve told him a hundred times: Carpets are defined as a Muggle Artifact by the Registry of Proscribed Charmable Objects, but will he listen?”

“I doubt it,” said Mr. Crouch, accepting a cup from Percy. “He’s desperate to export here.”

“Ali thinks there’s a niche in the market for a family vehicle,” said Mr. Crouch. “I remember my grandfather had an Axminster that could seat twelve — but that was before carpets were banned, of course.”

He spoke as though he wanted to leave nobody in any doubt that all his ancestors had abided strictly by the law.
Harry Potter and the Goblet of Fire - Chapter 7

“Oh I’m sure Mr. Crouch will be up and about in no time,” said Percy importantly, “but in the meantime, I’m more than willing to take up the slack. Of course, it’s not all attending balls” — he laughed airily — “oh no, I’ve had to deal with all sorts of things that have cropped up in his absence — you heard Ali Bashir was caught smuggling a consignment of flying carpets into the country? And then we’ve been trying to persuade the Transylvanians to sign the International Ban on Dueling. I’ve got a meeting with their Head of Magical Cooperation in the new year —”
Harry Potter and the Goblet of Fire - Chapter 23

In Quidditch through the Ages it is clarified that Far East still uses the Flying Carpet.

We are so accustomed these days to the fact that every wizarding household in Britain owns at least one flying broomstick that we rarely stop to ask ourselves why. Why should the humble broom have become the one object legally allowed as a means of wizarding transport? Why did we in the West not adopt the carpet so beloved of our Eastern brethren? Why didn’t we choose to produce flying barrels, flying armchairs, flying bathtubs – why brooms?
Quidditch through the Ages - Chapter 1

Quidditch has never achieved great popularity in the East, as the flying broomstick is a rarity in countries where the carpet is still the preferred mode of travel. The Ministries of Magic in countries such as India, Pakistan, Bangladesh, Iran, and Mongolia, all of whom maintain a flourishing trade in flying carpets, regard Quidditch with some suspicion, though the sport does have some fans among witches and wizards on the street.
Quidditch through the Ages - Chapter 8

Flying Carpets were once again brought up on two of Rowling's W.O.M.B.A.T. quizzes.

Question 1 out of 17
Which Ministry of Magic department(s) and/or committee(s) would you contact to resolve each of the following dilemmas?
Part 1 out of 5
Your neighbour is concealing a stash of flying carpets, some of which he is allowing to fly loose around his back garden.
☐ Wizengamot
☐ Department of International Magical Cooperation
☐ Misuse of Muggle Artefacts Office
☐ Obliviators
☐ All of the Above
☐ None of the Above
W.O.M.B.A.T. Grade 1 (the first choice was given full credit, but choices 'b' and 'e' received partial credit.)

Question 7 out of 15
Mark the following statements True or False
Part 3 out of 10
The trade in flying carpets has been banned everywhere except the Far East.
☐ TRUE
☐ FALSE
W.O.M.B.A.T. Grade 3

While Flying Carpets aren't used in Wizarding Britain anymore, we see that Muggles there still associate them with Wizards.

He was about to go back upstairs when Uncle Vernon actually spoke.
“Funny way to get to a wizards’ school, the train. Magic carpets all got punctures, have they?”
Harry Potter and the Philosopher's Stone - Chapter 6

Flying Carpet has been mentioned several times in the canon. In the 4th book, someone tried to smuggle them into England (the other answer has the quote).

Quidditch has never achieved great popularity in the East, as the flying broomstick is a rarity in countries where the carpet is still the preferred mode of travel. The Ministries of Magic in countries such as India, Pakistan, Bangladesh, Iran and Mongolia, all of whom maintain a flourishing trade in flying carpets, regard Quidditch with some suspicion, though the sport does have some fans among witches and wizards on the street.

According to this image from A Guide to the Graphic Arts Department: Posters, Prints, and Publications magic carpets were not only legal in the UK, but were at one time positively encouraged to be used by the Department of Magical Transportation... when operated by licenced professionals for the use of public transport, similar to muggle 'black cab' taxis and minicabs. 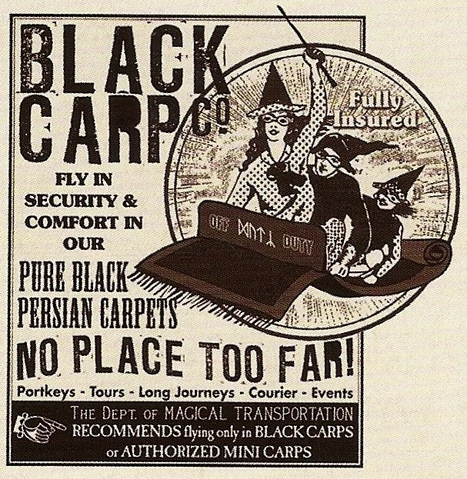 Alas, the accepted answer would suggest that these fine vehicles have now been made illegal.

32
Why are flying carpets banned while flying brooms are not?

46
Where did the "Magic Blood" of the Harry Potter Universe Originate From?
8
Do Quidditch rivalries exist in the Wizarding World?
3
Can you be transported if you're *inside* of a portkey?
15
Can this inconsistency in the ability of the Summoning Charm (Accio) to summon animals be explained?
16
Is there an upper height limit to magical flight in Harry Potter?