Is there any explanation as to why small scale vehicles—such as X-Wings and T.I.E. fighters—in “Star Wars” have gravity?

I mean, in small scale craft one or two people are strapped in and sitting within a cockpit of the craft as they fly around. So gravity doesn’t seem to be necessary in cases like that. And in the case T.I.E. fighters, it seems it’s well known they do not have shields or hyperdrive… But somehow they have gravity systems?

Is it because gravity systems in the Star Wars universe are so cheap and easy to implement they are essentially like as commonplace as lightbulbs compared to other things—like shields and hyperdrive—that seem to be harder to setup, manage and implement?

star-wars artificial-gravity gravity
Share
Improve this question
edited May 15 '17 at 20:56

Because if such ships did not have artificial gravity or inertial compensators, the occupant would be reduced to chunky salsa every time the ship sped up, slowed down, or rounded a curve.

This website says Yavin is 198,000 kilometers across. So going around it from the rebel base on its moon will take several minutes. This video snippet says after the X-Wings left, the Death Star will be firing range in 15 minutes.

So let’s assume the X-Wing took 3 minutes to get there after take off. Let's also assume it had to go around 240,000 km instead of just 198,000 km to reach the Death Star since we need to include both the moon's distance from Yavin and the Death Star’s distance. That means the X-Wing would probably have to go faster than 1333 km/s average speed. Which means an X-Wing fighter must accelerate to faster than 1333 km/s in just seconds.

Accelerating from a near stop to 1333 km/s is not like those cars back on Earth that go from zero to 60 mph in 10 seconds.

Without inertial compensators, Luke would have been crushed by g-forces. R2-D2 might have survived. I am trying to imagine R2-D2 leading several other astromech droids in an the assault on the Death Star after all the pilots died.

This image (below) from the Star Wars: The Force Awakens: Incredible Cross-Sections book shows what acceleration compensators look like and the important safety purpose they provide.

Bottom line: Every ship—no matter how small—needs inertial compensators to protect the crew from death. 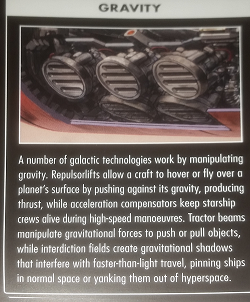 For manned craft that travel at the speeds involved in Star Wars, artificial gravity is a necessity.

Small changes in direction would produce forces that would pulverize a human pilot. So if you want to have fast-moving one-man fighters in a science fiction setting, they need to have artificial gravity to cancel out the accelerational effects.

From the movies, there is evidence that artificial gravity is ubiquitous. Moreover, it can be used to do more than just give a ship a uniform “down” direction.

On the Millennium Falcon—for example—the artificial gravity does not point in the same direction everywhere. In the pods from which the laser turrets are controlled, the gravity is oriented at a ninety degree angle relative to the rest of the ship.

Not the answer you're looking for? Browse other questions tagged star-wars artificial-gravity gravity or ask your own question.

44
How does the Death Star gravity work?
12
How does gravity work on Star Wars ships?
7
Why are inertial compensators only needed for crewed ships?
3
Red Dwarf: time and space travel paradoxes in "Tikka to Ride"?

10
How can S-foils (X-foils) help with heating in space?
15
Where do TIE Fighters generate thrust?
8
Where do X-Wing fighters—and similar small scale Rebel craft—dock to refuel and tune up when in space?
12
Do we see a 'gated' planetary shield in any Star Wars works before Rogue One?
8
Are the cockpit windows on “Star Wars” spacecraft transparent?
4
Why are Star Wars fighter ships crewed with humans and biological sapients instead of droids?
5
How capable are Y-wings and B-wings for taking down a First Order Dreadnought?
7
Is there any spacecraft in Star Wars that doesn't have artificial gravity?