Does any explanation exist clarifying what happened to the escape pod R2-D2 and C-3PO used at the beginning of the first “Star Wars” film?

So at the beginning of Star Wars (1977) R2-D2 and C-3PO escape the captured Tantive IV blockade runner in a class-6 escape pod and land on Tatooine.

We see them leave the escape pod to go off and do whatever they were doing on Tatooine—mostly getting captured by Jawas at the start—but is there any explanation anywhere—in “Legends” or canon—that addresses what might have happened to that actual escape pod? It’s fate is ambiguous in the film. Did Jawas grab it? Was it scrapped and refurbished to be refitted in another ship? Did the desert sands on Tatooine bury it out of sight?

Everyone knows that Imperial stormtroopers found the pod and even a few stray parts of droids that fell off, but what the heck happened to the actual class-6 escape pod itself after all of that nonsense?

It was (likely) destroyed.

If any part of the pod was found on the ground, it would contradict Vader's cover story that the ship was destroyed in orbit. It's not clear whether the troops on the ground blew it up or if it was lofted back into orbit to be investigated, then vaporised on board the Star Destroyer but either way, Vader was very clear about not leaving any evidence.

The Commander pursed his lips, shook his head slightly, perhaps a bit sympathetically, as he considered the woman. “She’ll die before she gives you any information.” Vader’s reply was chilling in its indifference. “Leave that to me.” He considered a moment, then went on. “Send out a wide-band distress signal. Indicate that the Senator’s ship encountered an unexpected meteorite cluster it could not avoid. Readings indicate that the shift shields were overridden and the ship was hulled to the point of vacating ninety-five percent of its atmosphere. Inform her father and the Senate that all aboard were killed.”

As the officer and troops departed, Vader turned his gaze back to the Commander. “Vaporize this fighter—we don’t want to leave anything. As for the pod, I cannot take the chance it was a simple malfunction. The data it might contain could prove too damaging. See to this personally, Commander. If those data tapes exist, they must be retrieved or destroyed at all costs.” Then he added with satisfaction, “With that accomplished and the Senator in our hands, we will see the end of this absurd rebellion.”

As we know, the Imperials found the pod, and subsequently found droid parts in or around it. Of course they then started hunting for the droids because of that evidence.

* Please note that I was unable to find anything to back up this conjecture in canon or legends but it is an offered possible outcome.

In DK's Star Wars: the complete vehicles the Jawas used it for spare parts. 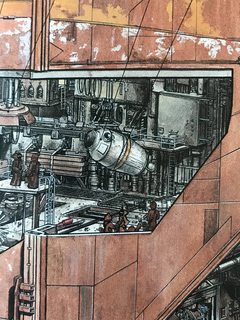 14
Why did Leia give the stolen version of the Death Star plans to R2-D2 instead of a copy?
16
How well known were the events of the original “Star Wars” trilogy in the general galaxy? Or was it all about clandestine special operations missions?
54
What was C-3PO talking about when he said, “That’s funny, the damage doesn’t look as bad from out here.”
39
Does marriage exist in the Star Wars universe?
4
Does the “Star Wars” book C-3PO have a malleable face?
74
What did Darth Vader mean by “There’ll be no one to stop us this time.” Who had “stopped” Vader—or the Empire—previously?
4
Does biological evolution exist within the Star Wars universe?
5
What firearms regulations exist in the Star Wars universe?
13
Which droid lost a part that was discovered by Davin Felth on Tatooine?