Fantasy webcomic about an annoying child and her guide

I managed to read the first chapter of this comic about a year ago, then I lost the tab. It starts with a girl with a tail surveying a landscape which she seems to think is (or will be) hers. It's not clear whether she was actually royal, but she acts like she is, and the uncle she was being escorted to seemed like an important guy.

She argues constantly with her surly zombie escort. She's bad at directions and leads him on some detours. Eventually, she manages to piss of some giant tree elemental sort of thing (I think she panicked and shot a fireball at it or something). Guide kept trying to deescalate because apparently the things are normally peaceful and if she would just stop provoking it they wouldn't have to kill it. She doesn't, and they do, and I think they find a bunch of old stuff that it had eaten. They continue on their trip and the chapter ends.

Then we cut to chapter two, which from the first page seemed to be about some dudes who were smuggling something, but I'm not at all sure about that.

The art was very colorful and looked pretty professional, but still a cartoony rather than realistic style, and not very anime-ish. Not really sure how to describe it beyond that.

The girl is indeed very annoying to her guide.

It's been a while since I read it but I do seem to remember something about a tree elemental as well.

Smugglers do appear as well though I'm not sure if it's in the second chapter already.

The girl also has a tail. The guide is a zombie.

This is probably not the right one, but a Google search for princesses and trees and fireballs turned up Kagerous which starts with a female protagonist in a tree with an insect guardian, and who throws around fire. It is very colorful. That said, her guide is more nonverbal, and chapter 2 does not open with smugglers. And the protagonist may be an androgynous male with multiple personalities. 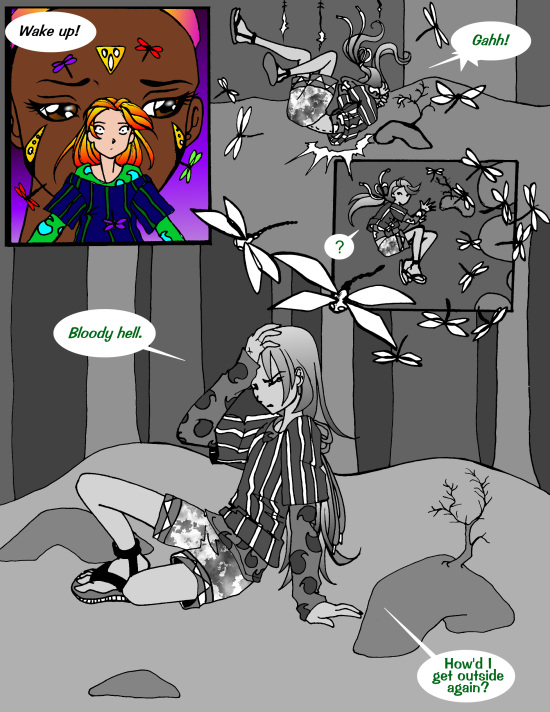