Book about a spacefaring race of winged creatures with talons, read about 15 years ago

This is most certainly the Animorphs book The Ellimist Chronicles by K. A. Applegate.

The Ellimist Chronicles was published in 2000. Animorphs is "young adult" fiction, although this book (part of the Animorphs Chronicles sub-series) is a bit more "adult" than the main series.

Main character was male, and I think the title of the book may have been his name.

The main character is originally known as "Azure Level, Seven Spar, Extension Two, Down-Messenger, Forty-One" or more colloquially "Toomin" on his home planet Ket, but uses the nickname "Ellimist" in a virtual reality game, and that is the name he adopts later in the story.

I picture him as owl-like, but I know he had talons and wings at least.

Toomin was a Ketran. They were an avian race with four eyes, four wings, two arms, docking talons, and two pod-like feet.

The book possibly started on his race's home planet, and they had to leave to live on space stations for some reason.

The Ketrans played virtual reality strategy games in their spare time, where the players interfered with virtual alien civilizations to make them thrive and try not to destroy them in the process. These games were broadcast into space, and received by the Capasins, who mistook the virtual reality games for real recordings, thought the Ketrans were a powerful, violent species who interferred and meddled with pawn species, and promptly destroyed Ket and most Ketrans to protect the galaxy's species. Some Ketrans, Toomin among them, escaped.

Once they leave their home planet, there is a comment that their children will be born with flatter feet to accommodate walking on metal of the space station instead of gripping branches.

The Ketrans are very claustrophobic and used to live in large, open spaces, and have to adapt mentally to live on a small space ship. They also do discuss physically engineering their species to make it easier to find a suitable new home planet (or make it easier to continue living as a nomad species).

I'm forgetting a chunk of the book, but the main character becomes separated from everyone else, possibly left behind somewhere on purpose.

Toomin and the other remaining Ketrans crash land on an aquatic moon. Everyone but Toomin is killed in the impact.

Toomin survives, but he (and all the other dead Ketrans) are absorbed by a planet-spanning entity known as "Father" who incorporates all the minds and memories of all the corpses he's assimilated over the centuries/millenia. Father keeps Toomin alive to play mind games with him. Toomin eventually, after a long span of time, beats Father at a musical game, kills Father, and absorbs Father and all his combined knowledge. This new Father/Toomin entity travels the universe for thousands of years, and begins to resolve conflicts and crises under the new name "Ellimist".

Near the end of the book, he engages in a prolonged battle with some other hyper-powerful character (The fight might start on a water planet).

Near the end of the book, Ellimist engages in a prolonged battle with Crayak, another demi-god entity who wants to eradicate all life in the galaxy. The water planet is probably the one I mentioned earlier, although Ellimist doesn't meet Crayak there.

He is able to fly through space on his own without a ship.

Ellimist swaps out body parts with ship parts and becomes a kind of cyborg ship, so I guess that kind of fits?

Their fight spans the galaxy.

Crayak and Ellimist fight battles and mind games throughout the galaxy that have entire worlds or solar systems at stake.

Main character ends up in a black hole, omniscient and observing a planet (possibly Earth?).

Ellimist is lured by Crayak into a black hole and loses his physical ship-body, but becomes a god-like being who is integrated into the fabric of space-time.

A boy from the planet dies and shows up where our main character is.
Main character and boy talk about whether anything in life has meaning or affects anything.

One of the Animorphs (the main characters in the 54 main Animorphs books) does die near the end of the main saga. The framing story in The Ellimist Chronicles chronologically takes place at this point in the main saga, and reveals that before dying, this character "meets" Ellimist and is recounted Ellimist's life story before dying; however, the Animorph's identity (and gender) is not actually revealed. 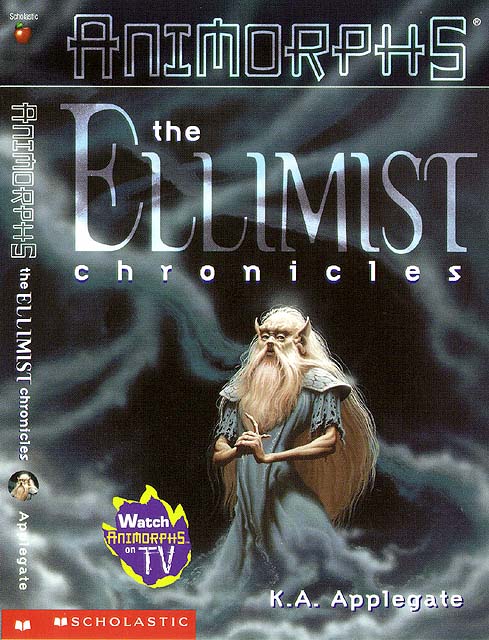 12
Man floating on a red ocean possibly involves time travel
4
Trying to find a book where the main character is female, main theme is trading and clans or gypsies
11
Identifying a "finding Earth" series of SciFi novels
14
Novel with a hyperspace pilot who goes to supernova party, falls in love with god who becomes a planet
3
YA/childrens book I read in the mid-late 90s, about videogames & crocodiles?
6
Children's or young adult science fiction book about a human "alien" raised among uplifted animals