Does Logan (Wolverine) get drunk?

It's not difficult to find scenes of Logan drinking.

Does Logan get drunk?

If not, why does he drink? If yes, shouldn't his healing factor make him immune to poisons?

Yes - it's possible, although very difficult, for Logan to get drunk.

Due to his healing factor, alcohol and other intoxicants do not affect Wolverine like they would a normal human. His system, even at low efficiency rates, burns the substance out of his system faster then he can feel the effects. Amounts that would kill a stout drinker from alcohol poisoning barely give him the "buzz" effect that would constitute "drunkenness".

That said, it IS possible under the right conditions for Logan to get drunk. It would require a continuous supply of the substance, and in a faster rate then what his body can burn out/consume. The same applies to any kind of sedative or medication, as seen in the original Weapon X comic as well as the "Enemy of the State" story arc:

In a flashback from Wolverines #11, we learn that Logan's friends once got him drunk using a continuous feed of a highly-powerful alien liquor: 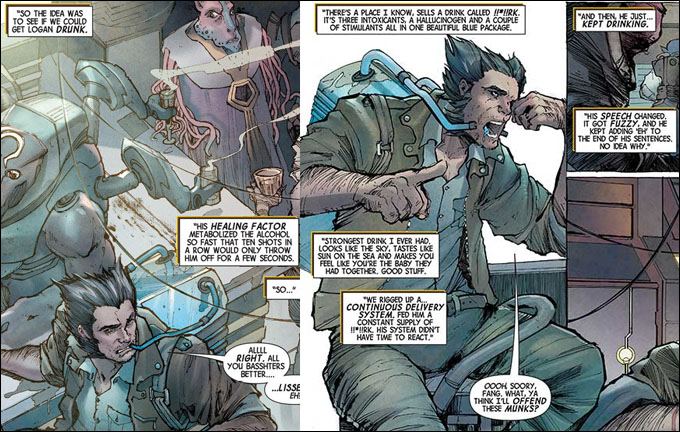 I'd have to expect that he can feel the effects of the alcohol - but only for a really short time.

In fact - it would give him a really amazing capacity for putting away the hard stuff - which seems right in line with his entire character...

I know Logan hasn't got exactly the same powers, but Captain America can't get drunk, he explains in Captain America: First Avenger that it is due to his enhanced metabolism.

So I suppose they try to get drunk or look bad-ass. Also maybe they are just interested by the taste...

23
Could Wolverine's claws be prevented from unsheathing if his wrists are bent?
14
Is Wolverine an alcoholic?

12
Why does Logan remember WWII in The Wolverine?
20
Can Wolverine build muscle mass?
8
Can the Hulk's healing overcome supernatural afflictions?
5
Why doesn't professor X influence mind of Trask?
2
When, in the Wolverine Cinematic timeline, does Logan get caught in Nagasaki?
3
Where is Wolverine's healing factor "based"?
3
Does Deadpool's mutation enhance his sense of humor as a side effect?
31
Can Wolverine get cavities?
26
How can Charles Xavier be alive in the movie Logan?
5
Why does K'un-Lun need Danny to return to guard the pass?