Did anyone at LucasFilm acknowledge specific cases of borrowing from EU/Legends?

Did anyone at LucasFilm (or licensed material creators) acknowledge specific cases of borrowing specific information/ideas from EU/Legends into Disney Canon?

(as opposed to generic fact that "yes we will/do/did")

Just to clarify, the question is about canon material created after Disney transitions, NOT Lucas's own use of EU material in Episodes I-VI or Clone Wars.

Yeah, there's been some of this

Grand Admiral Thrawn is, of course, the obvious example; his history in the Expanded Universe was discussed by Dave Filoni at Celebration London 2016, as reported by Entertainment Weekly:

"Let's take a moment and expand the universe a little," Filoni said as the lights dimmed and the [Rebels season 3] trailer began to play. (You can see it yourself above.)

"You couldn't have grown up a Star Wars fan without encountering Thrawn in Heir to the Empire," Filoni said. "It was a dark time when there weren't any more movies, and it blew our minds that there could be more."

Pablo Hidalgo, one of Lucasfilm's story development executive, has been known to do this on occasion on his Twitter; there's a great example from May 2016 where he makes an (admittedly non-specific) admission that he and Dave Filoni, among others, tend to borrow from the EU: 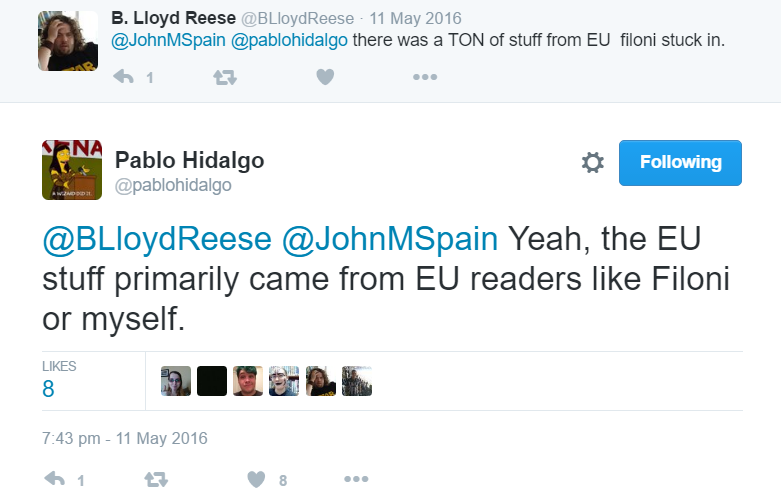 @BLloydReese there was a TON of stuff from EU filoni stuck in.

@pablohidalgo Yeah, the EU stuff primarily came from EU readers like Filoni or myself.

One example, from the Rogue One Visual Guide (written by Hidalgo) are the Yelsain Tree Dwellers; the planet Yelsain, with its giant trees, was entirely unremarkable in the EU. However, Hidalgo apparently made great use of it back when he was running tabletop Star Wars RPGs, so added it to Disney canon with an updated history out of a sense of sentimentality: 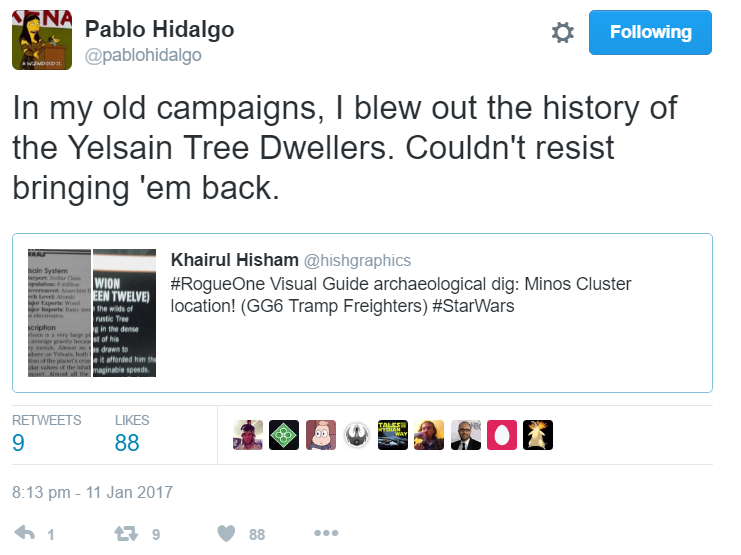 @pablohidalgo In my old campaigns, I blew out the history of the Yelsain Tree Dwellers. Couldn't resist bringing 'em back.

37
What Star Wars Legends (EU) content has successfully become a part of Disney canon?
18
Did George Lucas use any of the expanded universe material in the prequel trilogy?
9
Are there any Extended Universe references in “Star Wars Episode VII: The Force Awakens?”
5
How aware were the makers of The Force Awakens of Legends/EU Canon?

4
When did Luke Skywalker lose his virginity in Legends?
12
Did Disney officially call Legends/EU material "Not canon"?
9
What happened to new clones after the rise of the Empire?
5
Besides Chandler Riggs, did anyone comment on why Jeffrey DeMunn left The Walking Dead?
18
What Legends material did The Force Awakens explicitly contradict?
8
How much did stormtrooper armor used by Lucasfilm cost to manufacture?
17
Did anyone involved in Star Wars other than George Lucas think it was a good idea to make Greedo shoot first?
7
Were the black armor Stormtroopers supposed to be Dark Troopers from Legends?
23
Why did "A Stanley Kubrick Production" not draw a fine, while "Lucasfilm Ltd." did?