What does Finn personally think of his past?

Here's what got me thinking about this:

During the battle on Takodana, Finn takes a blaster rifle from a dead or incapacitated Stormtrooper and shows off his incredible shooting skills (Apparently he washed out from the Imperial Stormtrooper Marksmanship Academy.) He knows those F-11D blasters inside and out and can use one like it's an extension of his own body. So why didn't Finn keep that blaster?

I realized that it's because that blaster is a quite visible symbol of Finn's past identity as a trooper, an identity that is behind him, and he wishes to leave it that way.

However, he never got a chance to keep the cat from getting out of the bag even if he might have wanted to. Poe Dameron likely told the whole Resistance about Finn and his heroism, and besides he would have had to reveal his past anyway in order to establish his credibility when talking about Starkiller Base. So it's no secret that he's a former Stormtrooper.

Given the above, how does Finn himself view his past? Is he ashamed of his former identity or is he proud that he chose to desert the First Order? Or does he simply prefer to avoid discussing it if possible?

Finn progresses from a character actively running from and hiding from his past, aware of the evil his former employers are capable of and wanting nothing to do with being with or fighting against them. He is only interested in saving himself and Rey. As he grows, he decides that fighting for the bigger cause is a better way to live (and possibly die).

At the close of the events of The Force Awakens and the beginning of The Last Jedi Finn is still figuring out who he is:

He states to Poe:

"Look, Poe," he said. "I believe in what you guys are doing. But I didn't join this army - I followed Rey here. I just don't want you thinking I'm something I'm not."

Finn initially has no interest in being a hero. He wants to run away as far as he can: 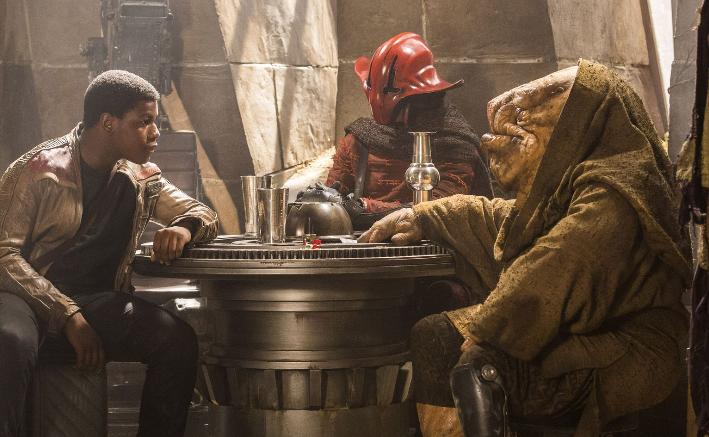 "His friend's reaction only made Finn feel more guilty. Poe didn't understand that Finn hadn't joined the attack on StarKiller Base to help the Resistance, but to rescue Rey. Finn had dreamed of convincing her to join him somewhere in the wilds of the Outer Rim, where the First Order could never find them."

Finn is terrified of the First Order and only intent on being with Rey:

"Finn got to his feet. He knew what he had to do, [leave the Resistance ship and go find Rey], even though Poe and his other friends in the Resistance would never understand. He just hoped he wouldn't regret it for the rest of his life."

When Rose confronts him (after stunning him for apparently deserting):

"Sorry," Finn said. "But I did what I did to help my friend, not to join another army....'Look,' Finn said pleadingly, 'If I could save Rey by saving the Resistance fleet I would, but I can't. Nobody can."

Finn never cared about the First Order's cause, nor the Resistances' ideology (though he does agree w/ the later, just not enough to fight for it):

"'I was raised in an army to fight for a cause', he said. 'Then I met Rey. And for the first time I had someone I cared about to fight for. That's who I wanted to be."

He finally comes around to the realization, after seeing the nihilistic outlook of DJ, that there are bigger things worth fighting for rather than only looking out for yourself:

"You could pretend the regime didn't exist, or rationalize its excesses away, or seek to insulate yourself through wealth or connections, or flee it and hide*...all of those things were easy to do. The harder thing by far was to fight - to attract that murderous regimes attention, and become an object of it's malice. **But that was the only thing to do. Those who chose something else were hoping that the monster they had ignored would eat them last.

Fin had fought. It had taken him a while to understand that running wasn't an answer, but he had figured it out. He had fought to save Rey, at first, but Poe had been right - this was far larger than one person, or two, or two billion. He hadn't won - that was an annoying detail...and here at the end, he found he wouldn't trade having fought and lost for being DJ.

"I won't let them win!, Finn said, his voice wild.

3
Finn and Poe crash tie fighter on Jakku. Squad sent to follow them. What gives?
25
Does Finn have any strengths?
8
Why does Finn mistake Han's freighter for a First Order vessel?
5
Why does the Resistance trust Finn so easily?
1
What battles from before the Clone Wars would Finn have been studying?
14
How did Rey get her blaster back?
6
How did Finn think the Force would work?
27
Do First Order blasters maintain a record of when they were fired?