What's the origin of the name of the Tantive IV?

Tantive IV is the ship used by Leia in Rogue One and A New Hope. 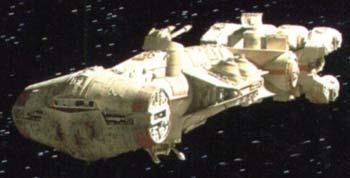 Tantive has the feel of the end of an English adjective. (I think of substantive.) This wouldn't be dissimilar to the names of Darths (inVader, inSidious, Maul) which are inspired by evil-sounding English words.

Do we have any (presumably out-of-universe) explanation for the selection of this name?

Less likely: Any explanation for the selection of the numeral IV?

According to the Star Wars: Blueprints - Rebel Edition factbook, the Tantive IV was renamed in honour of representatives from the distant Tantive system.

The Corellian Engineering Corvette CR90 is the starship of choice for everyone from respectable diplomats to notorious pirates. More than a decade before the Clone Wars, Queen Mazicia Organa of the planet Alderaan commissioned the Star of Alderaan to serve as a consular vessel for Senator Agrippa Aldrete. After the queen's son, Bail Organa, ascended to Viceroy and became a Senatorial representative, he renamed the ship the Tantive IV in tribute to visiting ambassadors from the Tantive system. It served House Organa for 30 years until its capture by the Empire, after which Darth Vader ordered it be destroyed.

Star Wars Insider Magazine identifies the fourth planet of the Tantive System as having engaged in an exchange of arts and artists with Alderaan prior to the renaming of the ship.

The fourth planet in the Tantive system is home to the Tantive Gallery of Progressive Arts, a sister gallery to Alderaan's own Aldera Museum of Modern Expression. A cultural exchange program of art and artists preceded the naming of the starship. 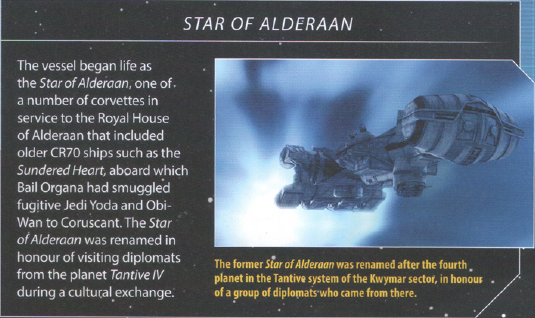 The ship's name wasn't included in the original script or film novelisation. The ship was merely referred to as a "blockade runner".

The awesome yellow planet of Tatooine emerges from a total eclipse, her two moons glowing against the darkness. A tiny silver spacecraft, a Rebel Blockade Runner firing lasers from the back of the ship, races through space.

The name 'Tantive IV' was subsequently added by Brian Daley for the (NPR) Star Wars Radio Play. According to Lucasfilm's Pablo Hidalgo (in Star Wars Insider #90), the name was based on the obscure English word "Tantivy" meaning 'to gallop at full speed'

The word "tantivy" was A.Word.A.Day's 'Word of the Day' a few days ago (https://wordsmith.org/words/tantivy.html). Made me think of this ship. It means: adverb: At full gallop; at full speed. noun: A fast gallop; rush. adjective: Swift.

Good name for a fast ship.

Not the answer you're looking for? Browse other questions tagged star-wars spaceship a-new-hope names rogue-one or ask your own question.