How did the Girdle of Melian work?

The Girdle of Melian is described like: "unseen wail of shadow and bewilderment".

But how it exactly impeded intruders?

Or it were purely formed from mental defenses confusing, intimidating, and making the intruders lose way?

Was real darkness the part of it, or "shadow" refers to despondency and other "inner shadow" stuff?

Was it a narrow ring, or more like a wide borderland, inhabitable and dedicated to defense?

Was it easily passable from in to out? (Túrin seemed to escape without problems.)

Did it defend against winged enemies?

Had it weaker and stronger points? (For example, where it followed rivers, (Sirion, Aros) containing the power of Ulmo, it could be stronger. Or the Northeast and Northwest sides, facing the Pass of Sirion, Ananch and the Gap of Maglor, where attacks were likely, could be more reinforced, while the Southwest side, towards the Sons of Finarfin and uninhabited forests, could be weaker. )

Melian's power and control over the substance of Arda:

Firstly, a bit of background on Melian and her powers as a Maia, as well as her development in Arda. From below, we see that she served Vána and Estë, who had power over flora and fauna and to heal all hurts, respectively. She also was skilled in songs of enchantment, and had a power over even the Valar:

Melian was the name of a Maia who served both Vána and Estë; she dwelt long in Lórien, tending the trees that flower in the gardens of Irmo [...] nor more wise, nor more skilled in songs of enchantment. It is told that the Valar would leave their works, and the birds of Valinor their mirth, that the bells of Valmar were silent and the fountains ceased to flow, when at the mingling of the lights Melian sang in Lórien.

For Melian was of the divine race of the Valar, and she was a Maia of great power and wisdom; but for love of Elwë Singollo she took upon herself the form of the Elder Children of Ilúvatar, and in that union she became bound by the chain and trammels of the flesh of Arda. In that form... she gained a power over the substance of Arda.
The Silmarillion: Of Beleriand and it's Realms

We see that over time, she gained great control over her powers.

Traps and ensnarments of the Girdle, how it impeded intruders:

Note that the only true account we have of someone being hindered in the Girdle is Túrin.

Secondly, the girdle varied with location. Considering the majority of Doriath was surrounded by forest (see bottom) the "pathless trees" were likely to have surrounded Doriath, however certain areas were decribed as being "wrapped in mists".

In the south-west of Doriath, where Aros flowed into Sirion, lay great pools and marshes on either side of the river, which halted there in his course and strayed in many channels. That region was named Aelin-uial, the Twilight Meres, for they were wrapped in mists, and the enchantment of Doriath lay over them.
The Silmarillion: Of Beleriand and it's Realms

at last, weary and haggard, they reached the confines of Doriath. But there they became bewildered, and were enmeshed in the mazes of the Queen, and wandered lost amid the pathless trees, until all their food was spent. There they came near to death...
The Children of Húrin: The Departure of Túrin

This extract from the Children of Húrin, suggests that the Girdle was relentless, and likely killed various people from starvation, with Turin only having been saved by Beleg Strongbow.

There are also "March-Wardens", however initially described as "hunters" as Túrin becomes of age, he joins them. No march-wardens are named bar those in the north, however Morgoth's Orcs were most likely to attack from the north.

And soon after he put on the Dragon-helm, and took arms, and went away to the north-marches, and was joined to the elven-warriors who there waged unceasing war upon the Orcs and all servants and creatures of Morgoth.
The Children of Húrin: The Departure of Túrin

One only was mightier in arms among the march-wardens of Thingol The Children of Húrin: The Departure of Túrin

I could find no description of the size of the "ring" or what it encompassed.

All allowed to enter could leave at their will:

The Girdle of Melian does not hinder the going of those that passed in with our leave.
The Children of Húrin: The Departure of Túrin

The only mention of winged creatures flying explicitly stated flying near Doriath are Manwë's Eagles. However they stop at the borders. Whether this is because they've decided they've flown far enough, or simply cannot enter is unknown.

“And at the last the eagles set them down upon the borders of Doriath;”
The Silmarillion: Of Beleriand and it's Realms

Doriath was a realm of forests about the great river Sirion, with in it the forests Neldoreth (also Taur-na-Neldor, the northern beech forest), Nivrim (also West-march, an oak forest), and Region.
Tolkien Gateway: Doriath

Southward lay the guarded woods of Doriath, abode of Thingol the Hidden King, into whose realm none passed save by his will. Its northern and lesser part, the Forest of Neldoreth, was bounded east and south by the dark river Esgalduin, which bent westward in the midst of the land; and between Aros and Esgalduin lay the denser and greater woods of Region. Upon the southern bank of Esgalduin, where it turned westward towards Sirion, were the Caves of Menegroth; and all [All] Doriath lay east of Sirion save for a narrow region of woodland between the meeting of Teiglin and Sirion and the Meres of Twilight. By the people of Doriath this wood was called Nivrim, the West March; great oak-trees grew there, and it also was encompassed within the Girdle of Melian, that so some portion of Sirion which she loved in reverence of Ulmo should be wholly under the power of Thingol.
The Silmarillion: Of Beleriand and it's Realms

A map of Doriath is attached below (if anyone can help identify the source that would be great, but it looks like something Tolkien may have drawn): 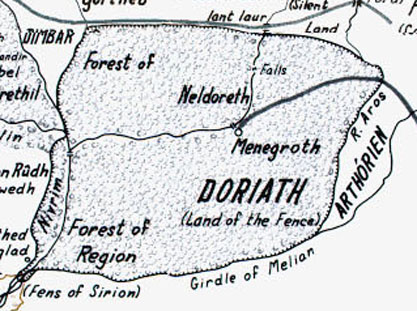 Not the answer you're looking for? Browse other questions tagged tolkiens-legendarium magic the-silmarillion maiar or ask your own question.

10
How did Túrin's sword speak?
3
How strong were the Maiar, physically speaking?
3
How did the Drúedain come into existence?
8
Was Galadriel present when Beren spoke to Melian
3
Was Sauron capable of breaking the girdle of Melian?
4
How did Feanor create the Silmarils?
10
How did the "original" Black Arrow work?
9
How many of the Ainur were unable to change their physical form?
1
How could Melian cure a curse that Morgoth himself cast on Hurin?
8
Was Melian embodied like the Istari during her time in Doriath?