This TOS novel features aliens that are liquid-filled bags that appear disgusting to most conventional species.

They abduct Kirk and make him command their ship. They have a human girl who has lived with them most of her life.

Early in the book, they kill using flamethowers.

The Three-Minute Universe - Book 41 of the series, which I originally found by my search taking me here. 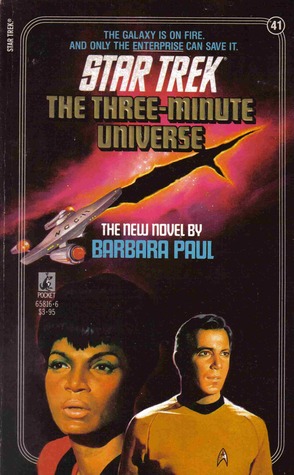 The Sackers may be the most hated race in the galaxy, so repugnant that their mere appearance makes most Federation citizens ill. That hatred runs both ways, and now the Sackers have stolen a powerful new device that they use to imperil the rest of the universe. They've torn a hole in the fabric of spacetime, an expanding tear so that one universe is leaking into another, and unless the Enterprise (TM) crew can stop it, it will consume everything in its path.

The Sackers were cursed with a physical appearance repugnant enough to turn even the strongest stomach. In addition to their nausea-evoking exteriors, they gave off an overpowering stench; most people of other races became violently ill in their presence, vomiting uncontrollably until removed from the sight and smell of the Sackers. And to top things off, Sacker speech was shrill and piercing, causing excruciating pain in their listeners' ears. This standard response to the Sackers was purely a physiological one, and it couldn't be helped. But even after half a century of exemplary behavior, the Sackers still found that their presence inspired reactions ranging from uneasiness to near-violent disgust wherever they went.

They do indeed force Kirk to take command:

"We have need of your assistance," the newly named Babe told him. "Our ship has recently suffered a disastrous accident. Every officer and crew member on the bridge was killed--not one of our command personnel survived. I am a commander-in-training only. We brought you here, Captain Kirk, because we need you to captain our ship."

From the book, regarding flamethrowers:

One of the two Sackers who'd stayed outside the refrigerated cell--the gray one--had a weapon in his hand. Without further ado he pointed it at Hrolfson ... and set him on fire.

The crew which kidnapped them are adolescents. All of the adults died in the accident, and the children are working off of a vague data entries on how humans act and react, and using equipment they're unfamiliar with.

You're probably mixing up two different stories. One, as FuzzyBoots indicated, is TOS The Three-Minute Universe featuring the disgusting, burning-to-the-touch, sack-like Vinithi.

The other seems to me a TNG novel called The Children of Hamlin by Carmen Carter:

The story is about the Children of Hamlin, who were abducted from their settlement by the Choraii, a bunch of crazy musical aliens. Of course it riffs off the story of the Pied Piper, but that never jars. In fact it’s all very understated- as TNG always is at its best.

The deal is this- the Choraii wiped out the outpost of Hamlin and stole the children 40 years ago. Everybody knows about the Hamlin massacre. It gives Picard heart-burn to think of it. Now 40 years have passed, and the abductees will be grown up. For the past 10 years the Federation has been conducting top-secret trades with the Hamlin for the ‘children’, giving small amounts of raw metal (lead, zinc, gold) in exchange.

The problem is the children are barely human any more. They have adapted to life on Choraii ships, breathing in liquid oxygen, weightless, constantly surrounded by the Choraii’s musical language. When they come back to the Federation- they just die. They can’t adjust.

(I have the book somewhere, I don't recall the name of the girl - not so girl any longer after forty years).

Not the answer you're looking for? Browse other questions tagged story-identification star-trek star-trek-tos star-trek-eu or ask your own question.