What became of Lenwë and the Nandor who stayed with him?

Then one arose in the host of Olwë, which was ever the hindmost on the road; Lenwë he was called. He forsook the westward march, and led away a numerous people, southwards down the great river, and they passed out of the knowledge of their kin until long years were past. Those were the Nandor; and they became a people apart, unlike their kin, save that they loved water, and dwelt most beside falls and running streams. Greater knowledge they had of living things, tree and herb, bird and beast, than all other Elves. In after years Denethor, son of Lenwë, turned again west at last, and led a part of that people over the mountains into Beleriand ere the rising of the Moon.

But what became of Lenwë and his people?
Was he the beginning of what is now known as the Silvan Elves?
Does "southwards down the great river" mean Lorien? (Most of the Elves who dwelt in Lorien were Silvan Elves) Was Lenwë the leader of these people until Amdír (a Noldor) came and took over as King of the Silvan Elves.

The Silvan Elves (Tawarwaith) were in origin Teleri, and so remoter kin of the Sindar, though even longer separated from them than the Teleri of Valinor. They were descended from those of the Teleri who, on the Great Journey, were daunted by the Misty Mountains and lingered in the Vale of Anduin, and so never reached Beleriand or the Sea. They were thus closer akin to the Nandor (otherwise called the Green-elves) of Ossiriand, who eventually crossed the mountains and came at last into Beleriand.

Also, when was this reuniting of kin after "long years were past"? And were all Nandor who did not cross the Misty Mountains (such as Lenwë) then called Silvan Elves?

Sorry for the multu-faceted question. Any insight would be greatly appreciated as the migration of elves can be confusing to me at times

The Silvan Elves (Tawarwaith) were in origin Teleri, and so remoter kin of the Sindar, though even longer separated from them than the Teleri of Valinor. They were descended from those of the Teleri who, on the Great Journey, were daunted by the Misty Mountains and lingered in the Vale of Anduin, and so never reached Beleriand or the Sea. They were thus closer akin to the Nandor (otherwise called the Green-elves) of Ossiriand, who eventually crossed the mountains and came at last into Beleriand.

Unfinished Tales Part 2: "The Second Age" Appendix A The Silvan Elves and their Speech

The use of the word "became" is a bit misleading, though, because it's just another name for essentially the same group of people; it's a taxonomic distinction only. So in that sense, yes: all of the Nandor who never crossed into Beleriand became the Silvan, because that's how we define the word "Silvan."

This is discussed in much greater detail over at Is there more than 1 species of elf in the Hobbit/LOTR saga?.

The above passage also makes it clear that "the Great River" refers not to the Gladden exactly, but to the Anduin; this is usually a good guess when you hear the phrase "the great river," but it's also clear by looking at the two major Silvan population centers (Lothlórien in red, Mirkwood in blue), which are aligned along the River Anduin (highlighted in green; click to embiggen): 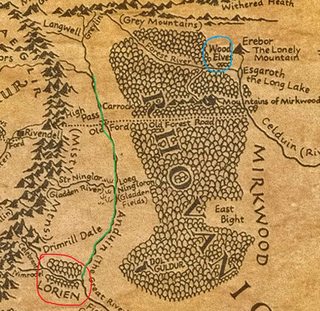 The ultimate fate of Lenwë is not discussed, but it's likely that he eventually died; we know that some Silvan colonies (specifically those in Greenwood and Lothlórien) would be ruled by Sindar or Noldor in later Ages, and it seems odd that this would be required if the Silvan already had a perfectly good leadership structure.

Which begs three questions which we cannot answer.

So what happened to the Nandor?

Well, those that chose not to cross the Blue Mountains would have been spread across the lands of Rhovanion and Eriador. Unfortunately we know little of the peoples of these areas whether Elves or Men. It is likely that the wars of the 2nd Age would have driven those that remained into Greenwood the Great ruled from Amon Lanc with a satellite realm in what would become Lothlorien.

The Elves of the White mountains would have dwindled slowly not becoming extinct until the haven at Edhellond ceased to be used. Which raises another point. We know that some of the Sindar sailed to Valinor from Edhellond, could some the Nandor or even Avari have done so.

As for the nature of Silvan Elves, these could well have included some of the Avari. They may not have wanted to risk the journey to Valinor, but there is no reason to think that they did not spread away Cuvienen and some must have come west until they reached Greenwood.

Unfortunately there are too many questions and too few answers.

28
Is there more than one species of elf in Tolkien's Legendarium?

2
What is society like in Aman?
2
Did the Teleri ever forgive the Noldor for the Kinslaying at Alqualondë?
2
What happened to the Moriquendi after the First Age?
5
What do we know about the Ainur who stayed in the Timeless Halls?
1
Eastern Elven realms in the 2nd age (and beyond?)
7
What happened to the first 3 Elves to wake at Cuiviénen?
10
What were Círdan's origins?
26
Why was Ondolindë always referred to as Gondolin?
7
Height of Mountain Ranges in Middle Earth
2
Were Malgalad/Amdír and Oropher both slain in the Battle of Dagorlad, or in two separate incidents?