I'm trying to find a cartoon that begins with an empire in Coup d'état. The king ordered the princess to escape while he held back the attackers. He sent her to a lab or something where she found a yellow robot who was assigned to protect her and they escape at the end of the episode.

The enemies have their own robot who looks like the yellow one. It is implied that both robots were created for the same purpose (protecting the princess) but he was too violent and volatile, so, even though he was superior in combat (he is running a simulation where he fights and obliterates the other robot), the yellow one is the one chosen for the task. In the next episode (or the third one; I don't remember very well) the princess and the yellow robot go to a mine to recover an artifact, which is some kind of hammer. The miners were ordered to hide there in case the robot was ever needed.

That is what I can recall of the series: It was shown in South America; only 3-5 episodes, really early in the morning. The robot was a bright yellow like Bumblebee from Transformers, but the design was more like a more rounded iron giant. It was pretty big: enough for the prince to ride his shoulder. I don't recall much of the princess besides she was in a classic princess-like long dress and had pretty long hair.

I'm pretty sure it is not Asian made. And for what I recall it was 3D, not drawn. I'm not too sure how old it is, since cartoons often take years before they make it to free TV, but the 3D was pretty good, so I don't think it is older than 10 years.

Are you certain it was a yellow robot? Because parts of this match up with Zentrix, a CG cartoon involving a princess being protected by a red robot and being opposed by a black robot who was also built to protect her, but who was rejected. 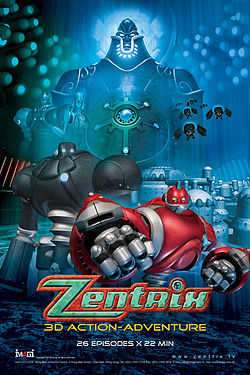 The series is set in Zentrix City, a seemingly "perfect" city. Emperor Jarad is a respected scientist who created a super-computer called OmnicronPsy, which manages all of the city's higher and day-to-day functions, controlling a wide variety of machines and robots, allowing humankind to live a seemingly "perfect" life.

However, OmnicronPsy, using its super-intelligence, decides that it would make a better ruler than Jarad, and breaks his coding that stops him from revolting. Discovering this, Jarad and the scientist Dr. Roark plan to head back in time 7 years to stop the revolt from ever happening. To do this they plan to shut down the six Zentrium chips that power OmnicronPsy. First however, Jarad takes precautions and develops two fighting robots - Zeus and Quantum. Zeus is then chosen over Quantum as the protector of his daughter, Princess Megan, should his mission in time fail. Following this, Jarad and Roark head back in time.

Princess Megan notices the disappearance of her father, and upon entering his study, she discovers a message. Megan then tries to get the Time Machine working. At the same time, OmnicronPsy has cracked the code and sends two robot guards to kill her. They find her just as she activates the time machine and open fire - damaging the time machine and altering Megan's body to that of an eight-year-old.

Not the answer you're looking for? Browse other questions tagged story-identification robots cartoon or ask your own question.

8
Old cartoon / anime about a spaceship that transforms in to a robot
5
Cartoon Identification: Late-70s or early 80s robot Romeo & Juliet story
10
Space cartoon from the 80s or 90s
12
Post apocalyptic cartoon about a robot girl who finds a radio in a junkyard
7
Old sci fi cartoon - Yellow round spaceship and an alien crew on a planet and maybe a maze
4
Help identifying old 80s (early 90s?) show where robots needed human pilots
4
80s/90's Robot cartoon, one like a Transformer
7
Anime/Cartoon with a Giant Police(?) Robot