Sci-fi book in the future about a city that had 2 levels.

The top level was for the rich people. A game center with a space flight game is added. The main character (male) plays with friends and wins a competition. He ends up in huge competition and does well. He finds his sister (twin I believe) and joins the military as the competition was just a recruitment game. He flies into "destroyed land" and finds out that rich barons are living on private islands. The destroyed lands were caused by some plague.

Could this be the 2009 book The Roar by Emma Clayton? 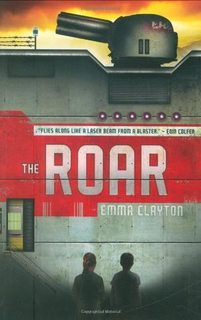 The world behind The Wall was divided into two; the rich live in the upper level known as The Golden Turrets while the poor live on the lower level, The Shadows.

12
Book about a boy who plays a video game that turns out to be a job interview
7
Story about boy living in a city sheltered from post-nuclear fallout?
5
YA novel: siblings from a walled city, whose DNA is spliced with animal DNA
6
Novel where government trains kids for the army through a VR game
4
Fantasy (audio)book about boy being recruited
4
Story about a child protagonist playing some sort of game