What's an ODN line, and what does ODN stand for?

In Star Trek TNG episode s7e18, "Eye of the Beholder", Deanna, Geordi and Worf are solving a mystery in the starboard nacelle. Behind a panel there is something that Geordi calls the "main ODN line". So, what's that thingy then, and why does it run in the nacelle? 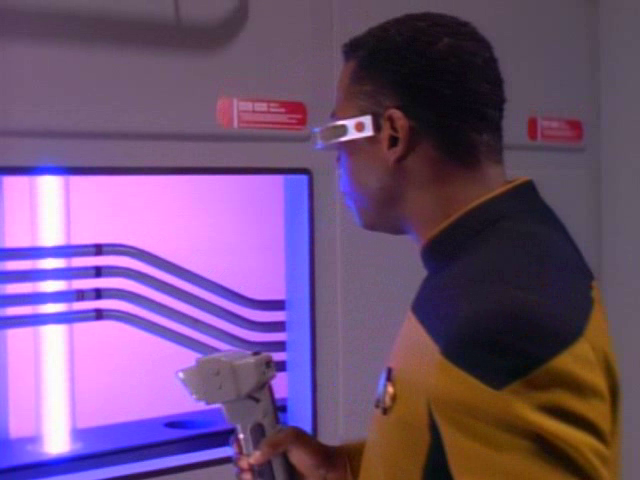 Here's Geordi examining behind the panel. That's the ODN line then, I guess.

Finally, does anyone know what ODN stands for? Sometimes these acronyms have funny origins.

From the Star Trek: The Next Generation Technical Manual

Data transmission is accomplished with a network of multiplexed optical mono-crystal microfibers. A series of five redundant major optical trunks link the two main computer cores in the primary hull, and an additional set of trunks link these to the third core in the engineering section. Any individual trunk is designed to be able to handle the total data load of the ship's basic operating systems. Major ODN trunks also provide information links to the 380 optical subprocessors located throughout the ship. These subprocessors improve system response time by distributing system load and provide a measure of redundancy in case of major system failure. From these subprocessors, additional ODN links connect to each individual control panel or display surface. Two secondary optical data networks provide protected linkages to key systems and stations; these backup systems are physically separated from the primary system and from each other.

and from the Star Trek Encyclopedia

ODN.
Acronym for optical data network. A system of fiber-optic data-transmission conduits used aboard Federation starships, serving as the nervous system of the ship's computer network.

In short, it's a series of interconnected cables that allows hardline communication between the ship's various systems.

The ODN line is the Optical Data Network line. The initialism is expanded in the TNG technical manual. All the data for computer control and monitoring of the nacelle will run through there back to the shipboard network and to the main computers.

Unfortunately, there's no fun origin story or cute meaning for this one. I imagine that an optical network was chosen both in-universe and out because fiberoptic links are incredibly fast and high bandwidth, and therefore suitable for carrying the massive amount of data generated and consumed by a starship and its inhabitants. They have been used for many years in networking and telecommunications.

The ODN is the Optical Data Network, and runs alongside the EPS (ElectroPlasma System) to all computerized systems on the ship.

Every control panel, light fixture, and warp nacelle has an ODN connector, which the computer uses to command and control the device.

The problem here is that it's now a single point of failure; the point of the ODN was to have multiple pathways for data to travel around the network. For example, there was a direct line between Main Engineering and the Engineering station on the bridge (TNG The N'th Degree), and likely many more direct access links to avoid network congestion.

One thing that many people don't realize, because it's not brought up much on the show, is that the Enterprise doesn't just have one Big Iron Computer mainframe. It has three mainframes, all linked to each other, running inside warp fields to process data faster, and many hundreds of subprocessors and microcomputers all linked to each other via the ODN. This required MASSIVE amounts of bandwidth to coordinate. (Star Trek TNG Technical Manual)

First off, it appears that the ODN carried data with high powered lasers, or else the sheer amount of data being pumped caused the fiber optic cables to carry a huge amount of energy, as ODN relays and lines were known to explode, not usually considered a failure mode of optical fibers.

Secondly, there was also a radio-based network available used for communicators and PADDs, kinda like Wi-Fi, many many years before Wi-Fi was ever a thing. In TOS, communicators were like telephones; you called into the Communications station/department, and had your call routed, or you could select a destination on the intercom. Starting in TNG, all communicator communication was point-to-point over the radio network; this network not only connected mobile devices inside the ship, but also from ship to shore and ship to ship, with automatic call routing. This radio network could also be used as a backup for the ODN, but it didn't carry nearly as much bandwidth as the ODN.

Interestingly enough, this implied "radio data network" is only mentioned in the Technical Manual and in Star Trek TNG novels... I can't think of any on-screen appearances of anyone using the radio network as a backup or as a component of some problem solving technobabble.

4
How does Thor see and speak to Odin after Odin moves on?

14
What two TNG episodes does Ashley Judd appear in and does she say she didn't?
21
What does EPS stand for?
5
What does Rom mean by “If that's what's written, that's what's written”?
17
Why is Worf always called by one name?
4
What's wrong with production numbers for ST:VOY 4x14 and 4x15
8
What's the standard procedure for actors playing Vulcans on TNG?
15
Does Lwaxana know that Picard is avoiding her?
29
What does Data's line at the end of “Ship in a Bottle” mean?
14
What's the source for this claim that Data ages?
20
What is latinum and where does it occur?