Since every zombie appears to be rotting, does their functional afterlife vary with their exposure to the elements?

Would a basement bound zombie function longer than a zombie that was trapped on the roof of a building and exposed to the elements? EDIT- All the zombies seem to exibit signs of decay. They appear to be rotting from the moment they transform.

Walkers are subject to the effects of their environment. However, in most cases the difference between normal continuous exposure to the elements and a sheltered indoor existence would not result in a significant difference in the walker's ability to function.

In most zombie lore, the normal healing factors stop functioning once the victim goes through the initial death. Broken bones do not mend. Cuts do not heal.

I have not read far enough into the comics to have seen any demonstration of this, but in season 2 of the show, in the episode Cherokee Rose, they find a walker trapped in one of their wells. As can be seen, long-term exposure has had a major impact on the walker's physical condition: 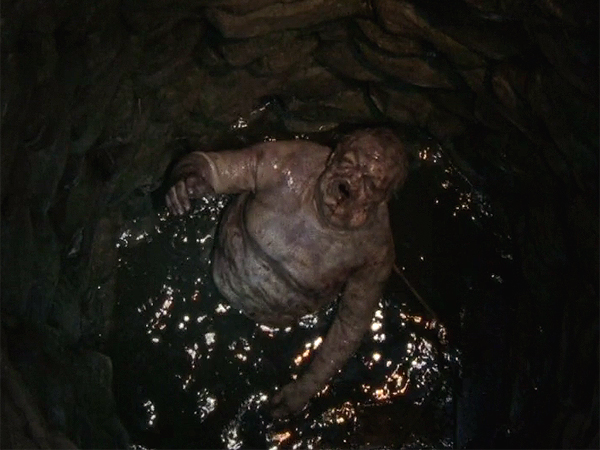 Not only has the flesh become unusually bloated, but also

the walker's physical integrity has weakened to the point where the body simply splits apart when they try to haul it out of the well.

The ease with which this occurs is significantly different than the ability of other walkers we see to hold weight, and seems almost certainly due to the long-term exposure to the water in the well.

While sitting in the bottom of a well for days, if not weeks, on end is significantly different than getting rained on occasionally, it does demonstrate that walker flesh likely has the same atrophying characteristics generally associated with zombie lore. This makes it likely that a walker that is kept inside would be in better condition than one who had spent an extended amount of time outside, as the exposure to wind, sun, freezing temperatures, and alternating periods of dry and wet would likely result in the accumulation of minor skin damage.

However, barring serious environmental impact (such as alternating periods of freezing and thawing, or debris blown by storm-force winds), any damage caused by exposure to the elements would likely be superficial. As it has been demonstrated that walkers can function while missing entire sections of their bodies, damage to, or even complete loss of skin would be unlikely to hamper them significantly.

It remains to be seen whether loss of skin would shorten the "lifespan" of a walker significantly. This largely depends on whether they eventually cease to function on their own, without traumatic injury to the brain. To my knowledge, this is not something that has come up in the comics, and is certainly not something yet addressed by the show.

Not the answer you're looking for? Browse other questions tagged comics tv the-walking-dead or ask your own question.

5
Would preserved bodies (such as ones encased in ice) reanimate when thawed out?

33
Why do the Walking Dead zombies stop decomposing?
13
Wolverine (with a criss crossed skin?) rescues the X-men which are in a strange hallucinated world
17
Why are the survivors in The Walking Dead (TV show) so keen on killing each other?
14
What kept the Walkers away from Hershel's farm in TWD?
6
Has anyone revealed why the word "zombie" is used in the comics, but not on the show(s)?
15
Why does hardly anyone wear body armour in The Walking Dead?