Who is Tobi in Akatsuki? I read the manga and it seems he said he is Uchiha Madara, after a short months of waiting the dead Uchiha Madara showed up in Impure World Ressurection. Now I'm getting confused if Tobi is really Obito as Rumored.

Question 1: Who is Tobi, please dont answer in Wiki. More personal beliefs would be more agreeable.

Question 2: When Obito died in the war where their sensei is the 4th, what time or what is the span of weeks, months, years did that happen before the Nine Tails attacked the Village? Because it seems Obito is a very weak Uchiha and if he is ever Tobi, what was the reason he attacked the village and how could he do that, he just awaken his eye, and he only has 1 Crushed Eye left.

Question 1: Tobi is the mastermind of the opposing force of Naruto. He would be the yang of the 5 great shinobi nations. When Tobi first joined he acted childish and was underestimated by everyone. Tobi has power but he doesn't show it until he wants too. Bottom line is that Tobi's true background is still a mystery but we can see from what is there that he just wants to summon the ten tails.

Question 2: Its a rumor and not yet confirmed and I don't think the rumor is true because Obito lost 1/2 his body. Obito didn't hate Konoha and liked his friends from there, but Tobi apparently hates Konoha. So Obito couldn't be Tobi.

If you are only following the anime, spoilers are below as they pull from the most current manga, which is much further along in the story than the anime. To get the latest scanlations, go to Anifreak.com.

In the manga, it's now officially revealed that Tobi is Uchiha Obito, and the leader of the Akatsuki. When half of Tobi's body was crushed by boulder, he did not die. It was Uchiha Madara that rescued him. 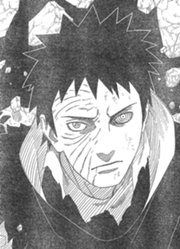 Obito was able to awaken the mangekyo sharingan when Kakashi killed Rin, someone they were both closest to.

He attacked the village because of his perception that Kakashi failed to protect Rin, which caused him despair and a loss of hope-- thus he adopted Madara's ideals of the Eye of the Moon Plan.

He obtained a new left eye sharingan after losing his original. And like Madara, he is able to control the nine tailed beast with his sharingan.

Not the answer you're looking for? Browse other questions tagged anime naruto or ask your own question.

5
Naruto Shippuden - The 6th Hokage
5
Can you get trapped in the Naruto dream world?
5
Does Naruto use Flying Raijin Jutsu?
3
What is the only Jutsu included in the manga from Filler Episodes of Naruto Shippuden Anime
23
Why does Naruto run with his arms behind his back?
1
Naruto fanfiction where the Kyuubi is female