It is a science fiction/fantasy novel set on some world that isn't earth. I think it is either in the future or an alternate universe. I read it in high school or college so, 10-17 years ago.

There is a female mercenary who is part of a mercenary guild. I feel like I recall she was being pursued by guild members who were trying to hunt her down. I'm not sure if there is any more to the story, but I remember that she was assigned to a mission and that she was able to grown iron nails.

Sound familiar to anyone? I want to read the book but have no idea what the title is or who it is by.

This could possibly be Molly Millions (https://en.m.wikipedia.org/wiki/Molly_Millions) from William Gibson's stories. She has retractable razors in her fingers. In the book Johnny Mnemonic, she battles with several other mercenaries.

Could you be thinking of Saber and Shadow by S M Stirling and Shirley Meier as per this answer? 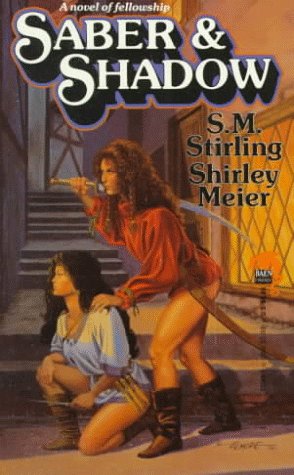 Then, she'd been able to feed herself things like fish oil so that the growth of her claws wouldn't leech her blood of iron. The witch/healer who had given them to her had explained that it would strain her body just to have steel claws, that she would have to guard against blood-weakness by eating liver and fish oil.

It's part of a larger series as discussed here. I don't remember guilds, but it's possible. It's a warrior / thief combo. One thing you might remember is that there's a scene where they narrowly escape and wind up being doused in molten sugar, resulting in burns and a scene where they help clean each other off.

8
Looking for an old book; thought the title was 'My Personal Demon'
9
Fantasy series: auburn-haired boy whose mother/grandmother goes missing, flying airships
16
Science fiction novel about an assassin's guild that claims to be apolitical (while doing the local tyrant's dirty work)
14
Aliens, technology, duck hunt: what's the name of the short story?
32
Manga about a female worker who got dragged into another world together with this high school girl and she was just told she's not needed anymore
15
80s (or earlier) book about a peacekeeping mission to a planet where war was over the rights to a migratory bird
18
Story about a book/writing invading our reality
5
Semi-comedic anime OVA involving a demonic invasion of a high school