Anime about guy with a unique robotic arm

I am looking for an anime about guy with a unique robotic arm. I remember a part where some dude steals a crystal, which later causes him to transform into something. I think and he is getting chased by some sort of force, I'm assuming the police, and he runs into the main character who has a robotic left arm and uses it to fight him then breaks it. After that, he is hired by the force after talking to his master/employer? Sorry if this is not clear

It sounds like it could be Full Metal Alchemist ? There are bad guys using crystals and that transform, the main character has a mechanical arm, the army is an important force in the story and the main character works for them, at some point he gets into a fight with one a guy that's on the run from the army and he breaks the arm. 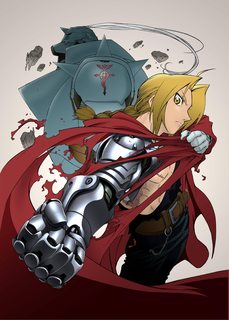 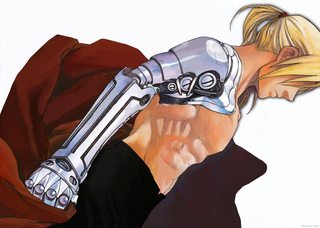 Scene (in FMA:Brotherhood, though there's a similar one in the 2003 version) where the main characters get into a fight with the guy on the run from the army, and he destroys the main character's mechanical arm: (actual breakage at 3:00 or so)

US Region YouTube Link - above link is region blocked

Following @Steve-O's clue, maybe you're thinking of The Adventures of the Galaxy Rangers?

It's American-Japanese, drawn anime-style. Their leader has a robotic arm and one of the team could transform into other life forms as needed.

s-cry-ed is an anime about a future police force with various psychic powers. The main character has a robot-ish arm.

Perhaps its the Cobra anime. It's had a few animated adaptations. The clip below is a remake, while the original TV series is from the 80s.

Prologue: Using his Psychogun, Cobra take care of three bounty hunters in an alley who plan to capture him. On the planet Mars, scantily dressed Professor Utopia Moore examines the remains of a fossil snail and sand whale skeleton. In New York, Cobra visits the Ancient Martian Art Gallery and research center dressed as a minister. Once inside he proceeds to steal a heavily protected diamond. Meanwhile Professor Moore examines her fossil snail data from Mars. Just as Cobra is about to steal the diamond two Pirate Guild space ships materialize in the walls of the building and begin attacking and killing the staff. Their leader, Gypsy Doc, confronts Professor Moore and demands the fossil snail data, but Cobra rescues her and they make their way to the rooftop. Just as they are about to escape in a helicopter, Cobra loses the diamond and the pilot is shot. She accuses him of being a thief but he still manages to get them both to safety. Intrigued why the Pirate Guild want the fossil snail data, Cobra intercepts Professor Moore when her research crew return to Mars.

9
90's-2000's animated series: protagonist with robotic hand can transform a seemingly antique motorcycle into a hoverbike

11
A short story about a word that is always the right answer
7
"Anger of a Sire" sci fi portal web novel
13
Low budget D-list movie with werewolf, emo guy, and mystical girl of his dreams
6
Anime where the guy has gems on his arm that indicates his power level?
7
Anime show featuring a blue boy with arm cannon
10
Cartoon about a boy who could transform into a big blue bird and speak to animals