I'm trying to find the title of a book I read somewhere around 1989-1993, but am not having any luck with Googling what I remember of it. It was a book aimed at slightly older kids (I'd say around middle school age), and might have been purchased through the Scholastic Book Club - it may have been part of a series (although if it was, I never read any of the other books in the series).

A sister and brother (I think the sister was the older of the two) go to visit their uncle for the summer, who lives out in a rural area in an odd house made of different kit homes/mobile homes/random construction all cobbled together into a big maze of a house.

The uncle is an inventor, and has been working on an interdimensional viewer. During one of his experiments, a boy comes through the viewer and the brother and sister make friends with him. The boy doesn't speak English, and they have trouble initially figuring out something for him to eat, but after some experimentation he turns out to really love peanut butter. Other than that I don't remember much about the interactions with the boy (I think they came up with a name for him, something like Dax or Gek).

We later find out that the mystery boy's father is also an inventor in his home dimension and was working on a similar viewer - the boy accidentally fell through at the point when the two viewers were tuned in to each other. By the end of the book, the uncle and the boy's father have managed to link their viewers again so the boy can return home, and the uncle and the father start sharing notes and working together on understanding each other's dimensions (as well as sending regular care packages of peanut butter through to the boy).

Does this seem familiar to anyone else?

Addendum I remembered something additional - I believe the boy had some sort of toy/puzzle with him from his home dimension that was a tangle of wire with a marble in it.

I think this is Nifkin by Kathleen Thomas. It was published in 1982 so it matches your time frame. 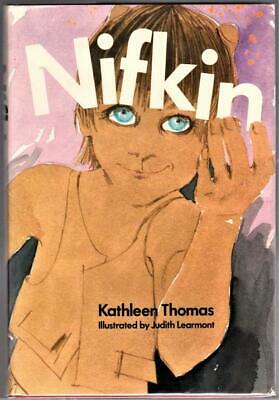 I cannot find a detailed review of the book anywhere, but the summary on Goodreads matches your description:

Jeannie and Justin move in with their eccentric inventor uncle and make friends with a small boy who comes through a screen from another planet and loves peanut butter and skunks.

There is a searchable copy of the book on Google books, and if I search for viewer then the brief extracts I get seem to match your description of the boy coming through the interdimensional viewer.

13
Short story identification: A boy visits a futuristic zoo and gets injured by a gorilla
16
Book identification: Beings from another dimension and a black virus
2
Movie ident : Boy chased by trolls
5
Story ID: A children's book about a school for Witches and Warlocks
9
Comic book with a TV used as an interdimensional portal
7
Need help finding a Fantasy Book with a sword wielder and sight sharer
14
Book Identification: Alternate dimension of energy enables FTL travel and colonization
8
Book Identification- Children's puzzle book about a rescue from alien abduction
5
Book about a girl with magic and a boy a with curse