Ask Question
Asked 10 years, 4 months ago
Modified 3 months ago
Viewed 28k times
17
Want to improve this post? Provide detailed answers to this question, including citations and an explanation of why your answer is correct. Answers without enough detail may be edited or deleted.

In The Once and Future King it is clear that Merlyn was "born backwards in time", but I cannot determine exactly what that means.

In The Sword in the Stone, chapter three, Merlyn says:

“Now ordinary people are born forwards in Time, if you understand what I mean, and nearly everything in the world goes forward too. This makes it quite easy for the ordinary people to live, just as it would be easy to join those five dots into a W if you were allowed to look at them forwards, instead of backwards and inside out. But I unfortunately was born at the wrong end of time, and I have to live backwards from in front, while surrounded by a lot of people living forwards from behind. Some people call it having a second sight.”

“Have I told you this before?”

“You see, one gets confused with Time, when it is like that. All one’s tenses get muddled, for one thing. If you know what is going to happen to people, and not what has happened to them, it makes it difficult to prevent it happening, if you don’t want it to have happened, if you see what I mean? Like drawing in a mirror.”

In The Queen of Air and Darkness, chapter four, Merlyn mentions the Mafeking Night and the Boer War, which happened 1899-1902. Merlyn also mentions Victorian fox hunting and Henry the Third. King Arthur says, “I wish [Merlyn] had been born forwards like other people.”

I would be interested in any additional passages in T.H. White’s books or interviews given that explain this concept in clearer terms. I am only looking for sourced answers to this question.

Reset to default
16
Want to improve this post? Add citations from reputable sources by editing the post. Posts with unsourced content may be edited or deleted.

This view of Merlin is canonical with the original written translation of the Arthurian cycle, "Le Morte d'Arthur" . In it, Merlin is said to "remember what is in our future", and to "have no knowledge of what is in our past".

He physically does not age, and this is never explained, only mentioned. There is never any reference to his perception of speech and motion being backwards as well.

All in all, there is no reason to think that T. H. White’s Merlyn is any different from canonical Arthurian myth. Merlin living backwards is mentioned in "Excalibur", "Camelot", and "A Connecticut Yankee in King Arthur's Court" and a number of other stories.

This is an apparently simple question which is surprisingly difficult to answer, simply because White was rather sketchy in detailing how Merlyn's memory worked. Nonetheless I do think there is enough information in the text to answer at least two of the three sub-questions at the end:

Yes, as time passes Merlyn gets physically younger. This is addressed in Chapter XX of The Once and Future King, describing the final years of the Wart's education:

The Wart continued to be stupid, fond of Kay, and interested in birds.

Merlyn looked younger every year — which was only natural, because he was.

So every year that passes, Merlyn becomes a year younger. We can extrapolate this forward to his eventual birth in the Wart's far future.

This is probably the most confusing part of White's scheme. As the OP notes, we are given some explanation when the Wart first meets Merlyn:

"Now ordinary people are born forwards in Time, if you understand what I mean, and nearly everything in the world goes forward too. This makes it quite easy for the ordinary people to live... But I unfortunately was born at the wrong end of time, and I have to live backwards from in front, while surrounded by a lot of people living forwards from behind. Some people call it having second sight."

Merlyn remembers Mafeking Night and he Boer War from the early 1900s, and from a passage in The Book of Merlyn he remembers ration cards ("In one of the miserable wars when I was a younger man, it was found necessary to issue to the people of England a set of printed cards which entitled them to food"), so for the sake of argument we can put his birth at 2000 AD. If we put the Wart's birth (also somewhat arbitrarily) at 1000 AD, we can graph their ages in this way: 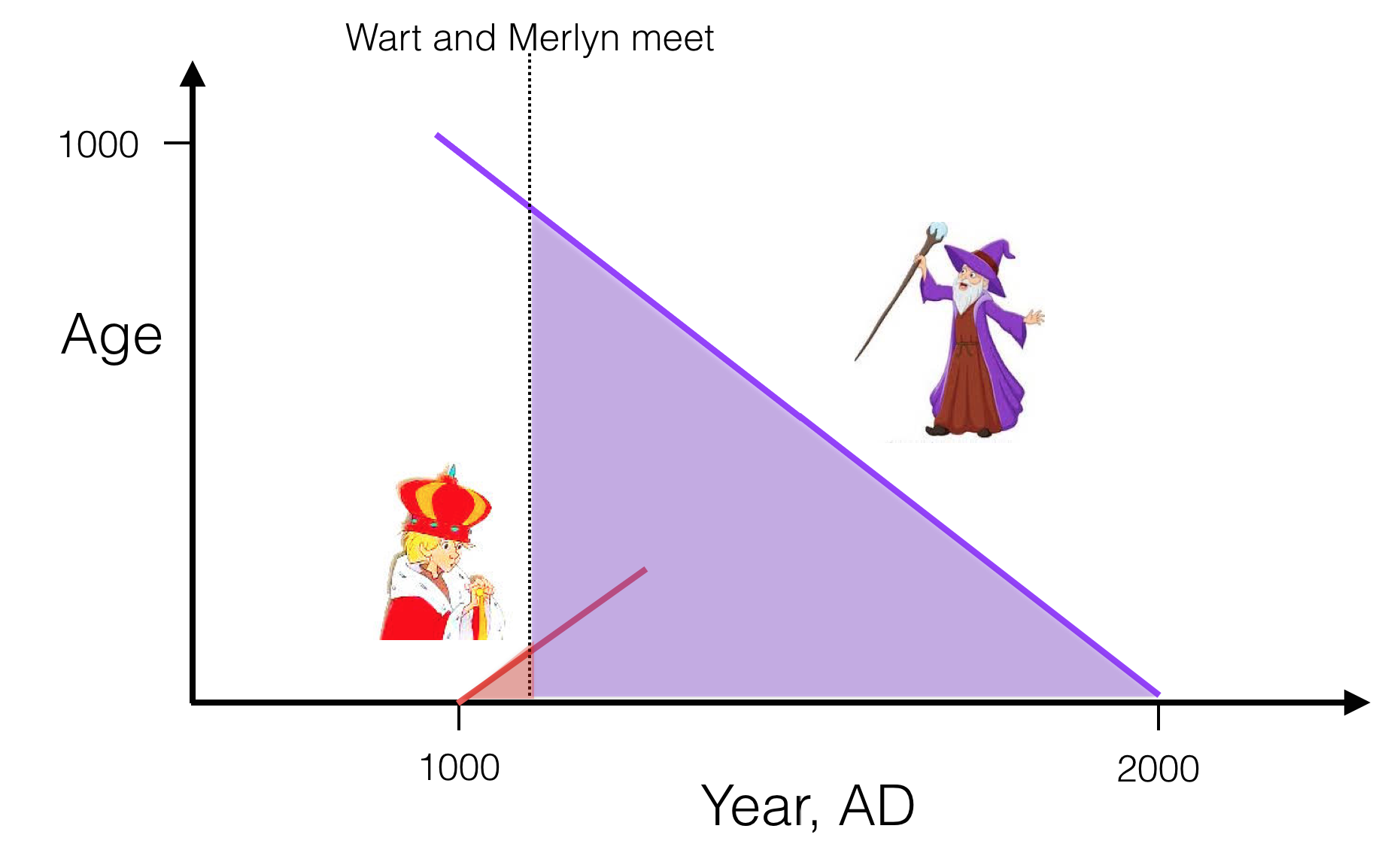 i.e. Merlyn's age decreases with time, while the Wart's rises. The shaded areas represent the time that the two characters can in principle remember at the moment of their first meeting. That is, Merlyn can remember all future events up to his birth, while the Wart can remember past events back to his birth (assuming they have perfect recall - which Merlyn definitely doesn't).

If we know look at a chronologically later time, we see that: 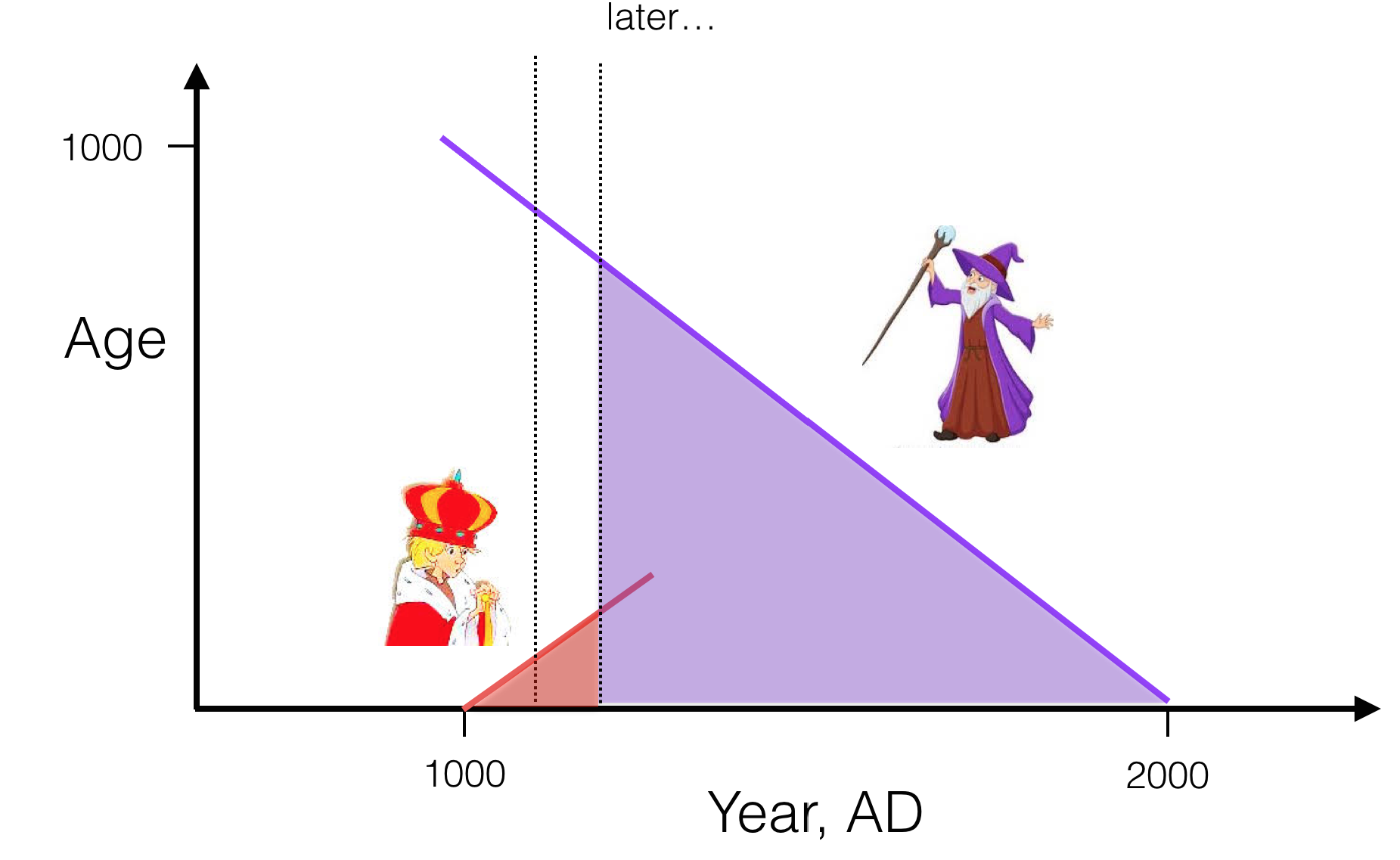 So while the Wart remembers their first meeting, as is completely normal, Merlyn does not. This is described (albeit somewhat confusingly) at the conclusion of the previous passage from TOAFK:

He [Merlyn] stopped talking and looked at the Wart in an anxious way.

"Have I told you this before?"

"No, we only met about half an hour ago."

"So little time to pass?" said Merlyn, and a big tear ran down to the end of his nose.

So indeed Merlyn has lost the memory of first meeting the Wart half an hour ago, while retaining his knowledge of events that are further in the Wart's future.

This is more difficult to answer, as I do not believe that Merlyn remarks much on his subjective experience of living backwards, except to say that it was confusing (especially for verb tenses). It does appear that his memory is lost more-or-less continuously, rather than in discrete chunks as in Groundhog Day. I say "more-or-less" because, as Hypnosifi observed in comments, Merlyn does seem to be able to retain short-term memory for a while. For example, he does not forget how to finish a sentence he has started, and is able to participate in normal conversations. This seems a very short term effect though, limited to at most to thirty minutes or so (the interval in which he forgot the circumstances of meeting the Wart).

It makes for a rather depressing universe in which there is a complete absence of freewill, and all events are preordained.

I don't have any proof to back it up, but I always believed it was like your option 3-B: he goes to sleep every night and wakes up on the previous day with knowledge of all the following days.

I just assumed it, from the statement you listed about knowing what will happen to people, but not what has already happened to them. I also assumed that he must be living each individual day "normally", since otherwise he really wouldn't be able to carry on a conversation with anyone, or even speak a sentence properly.

I dint think Merlyn is exactly "living backwards" otherwise he'd see people like the Wart and not remember them. Rather, like I believed someone else has mentioned, he is someone who experiences/ sees the future but lives in the past. What grants him his poses, for this reason, I think that Merlyn has a kind of omnipotence, or meaning that he lives both in the past and future.

Merlyn is a real time-traveler from the distant future. A temporal anthropologist, he traveled back in time to study early (relative to himself) human civilization.

However, upon arrival he was greeted by someone who knew him quite well, calling him by the name Merlyn. This breaches a fundamental tenant of time travel - to be anonymous so as to not disrupt the timeline and alter events resulting in the creation of a new reality.

As this person knows him, "Merlyn" is now in a causality paradox - he now has to assume this identity and work backwards through time, learning of the things he has done in their past (his future) and recreating them because failure to do so will create a paradox which will destroy his reality.

Only after he has traveled from end to beginning and become again unknown will he be free to return to his own time.

I think it’s a simple case of Merlyn being a forward thinker. Kind of similar to savants who understand things better than those around them. It would, especially during that time, be something that separates him from those around him. He understands technologies as well as how to make them better and more efficient.

Also, his understanding of the magical world is along the same lines. He understands things that only those in a future sense would understand them.

I believe Merlyn sees all time simply as a function of all possible state change within the third dimension, at least in a very localized area. Whereas most people see a certain derivative state change within their local area, Merlyn is able to see the integrals of 3D space-time, which quite simply involves a truly infinite amount of instantaneous calculations to happen at once... or something of higher dimensionality at work. The forwards and backwards is simply derivatives vs infinite integrals.

I think this is what makes him a wizard and not normal. But it sort of also seems to be a curse, nothing could ever excite you...

Not the answer you're looking for? Browse other questions tagged the-once-and-future-king or ask your own question.

36
Where does the "aging backwards" trope originate?
4
Was the similarity of the reversed timelines for Merlyn and River Song ever acknowledged?

5
Is Merlyn’s experience of time ever developed in T. H. White’s stories?