I'm trying to remember a book I read about 10-12 years ago. This is a young adult fantasy/scifi book, very similar to Kuromori series, but about Ancient Egypt. I believe it was originally written in English, but I read it in Russian.

The Red Pyramid has many of these elements, although not all. (The heroes are brother and sister, Anubis appears as a handsome boy, not a doberman...). 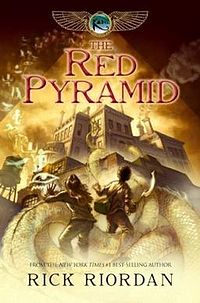 The novel opens with Carter and their father Julius Kane to visit Sadie, who has been living with her maternal grandparents since the death of the siblings' mother, Ruby Kane. Julius, who is secretly a magician but posing as a simple egyptologist, takes the siblings to the British Museum, where he tries to bring Osiris (the Egyptian god of the Underworld) back into the mortal world. Julius's magic has the unintended side effect of also summoning the gods Horus, Isis, Nephthys, and Set; and alerting the magicians Zia Rashid and Michel Desjardins to his actions, which are illegal within the magical community. Set, a god of chaos, captures Julius and destroys the museum. Unbeknownst to Carter and Sadie, each of the gods chooses a mortal host from the humans in the room.

Carter and Sadie are taken to Brooklyn by their uncle Amos, who explains to them that they are descended from a long line of magicians, beginning with the Egyptian pharaohs Ramesses the Great and Narmer. He also explains the grave danger Set poses to the world, and goes to find the loose god. While he is away, the mansion is attacked by minions of Set. With help from Sadie's cat Muffin, who is host to the goddess Bast, and Zia Rashid, they escape to Cairo. Once there, Carter and Sadie discover that they are hosts to the gods Horus and Isis, respectively. They train in magic until the magicians' leader Iskandar dies and Michel Desjardins orders their deaths for illegally collaborating with gods. The siblings escape and formulate a plan to defeat Set - hoping to both rescue their father and clear their names within the magical community.

The boy's name is Aton (from Echnaton). His parents are Egypt enthusiasts. His father works on a dam project in Egypt and his father's friend is a man named Petach (later revealed to be the ancient Egypt god Ptah). His parents get a doberman called Anubis and there is also a grey cat called Bastet.

10
Fantasy/urban novel about Greek-Roman gods
6
Young Adult Fantasy novel about some boarding school, classmates dying, and passing on?
24
Identify a fantasy series with ancient wizard who was training a young hero to fight a sleeping evil god
6
Young adult novel about flying
7
YA book about teen Atlantian in Egypt
5
Looking for young adult series from seventies about world, dimension traveling children
11
Book about accidental time travel using a mirror to ancient Egypt
10
1990s or early 2000s dystopian young adult novel, main character is teenage girl with a number as her last name