Story about a bunch of rodents?

The book had stuff about a guinea pig and some kind of assyrian rodent. In one of the books, the rodents time traveled (Assyria?) 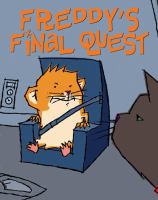 The final installment in Freddy's internationally acclaimed saga is his most adventurous yet--filled with time travel, crusaders, first love, and a shocking surprise!

Freddy--hamster extraordinaire--shuts down his computer when he is called upon to embark on a journey through time in order to save a young boy's life. Accompanied by Sir William the wise tomcat, Enrico and Caruso the guinea pig poets, and Tjark the robot hamster, the quintet find themselves in a dangerous land filled with Crusaders and wild Hamsters (Has Freddy found the Promised Land?)! But when the Crusaders capture Enrico and Caruso and plan to eat them, the entire mission is put in jeopardy. With time running out, can the team accomplish their mission? Will this be Freddy's final quest?

This library entry indicates that they do go to Assyria (Golden Hamsters are actually also known as Syrian Hamsters because this is where they originate):

Freddy the golden hamster and his animal cohorts, along with a computerized, robotic golden hamster, travel back in time to Assyria, where some of them are captured by crusaders and Freddy gets a taste of undomesticated living.