Name of a children/teenager fantasy novel involving a kid going through trials to become ruler?

I read this book about 5-7 years ago, so the image of it in my head may prove severely altered. Anyway, from what I remember, the book was a portal fantasy about a kid named "Eric" (could possibly not be his name) who finds another world. I believe once he gets to that world, he somehow becomes or is mistaken for the ruler of the area and has to go through trials in order to obtain some gem crown and prove his legitimacy and he is also one of the few humans in this place. Again,this may be a bit different from the actual book but this is what I remember. I also remember a brief part of one of the other books in the series where he gets a romantic letter by way of snail or shell that smells of perfume? and he travels to the area where the sender is located only to find that she is a very ugly monster.

P.S. The book is not "The Secrets of Droon" as it had way more chapters and pages altogether. 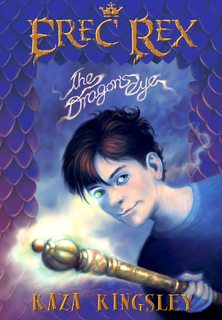 This series matches most of your main points: