I'm looking for a juvenile fantasy novel, written in English, with at least a few interior illustrations, which I borrowed from a library sometime in the early-to-mid 1980s. I found it very entertaining at the time, and I'd like to check up on it and see if I still like it today. The problem is that I remember precious little about the details of the plot.

Here's the bits and pieces that I do recall:

Could it be: Are All the Giants Dead? by Mary Norton, illustrated by Brian Froud

James, a young English boy, journeys to the fairy-tale world of princes and princesses, witches and fairies, giants and giant-killers, and invades the lair of the last giant to free a princess from an evil spell.

One night, when he should be safe in bed, young James is whisked away by his friend Mildred to the fairy tale land of Happily Ever After. There Cinderella and Sleeping Beauty are middle-aged gossips; Bell’s husband, the Beast, spends his days hunting dragon and unicorn; And Jack-the-Giant-Killer and Jack-of-the-beanstalk while away their retirement telling yarns about slaying the last of the giants.

But the two Jack’s aren’t quite telling the truth: one fierce man-eating giant still lives. And to spare his friend Princess Dulcibel from having to marry an enchanted toad, James must steal something from the dreaded giant’s bone-strewn lair, a place where even the veteran giant-killers fear to tread.

A snippet from the British Book News on Google Books shows this image when searching for Jack Giant killer:

Young James is transported by magic into an ageing fairytale world. He joins Jack the Giantkiller and Jack of Beanstalk fame in their quest for the last giant left alive.

A review can be found on tor.com: A Look at Something Larger: Are All the Giants Dead?

Going off information from the tor.com link:

Is it "The Last of the Giant Killers: Or, The Exploits of Sir Jack of Danby Dale" By John Christopher Atkinson? This is the picture I found of the cover. 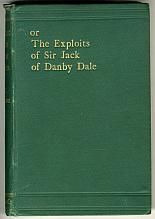