I remember watching a film when I was younger. It looked like it was from the ‘80s. I can’t remember any scenes other than this particular one.

There are group of rebel-like people in a cave-like setting. Some opposing faction breaches the location with what I can only describe as a sonar tank. This metallic machine rolls in, sets off its sonar cannon, and then people start running around, including one human character clutching his ears with blood spurting between his fingers.

I realise this is a very specific scene! Any ideas what this movie could have been?

I know this already has an answer, but there is no confirmation as of now and the description of the scene remembered me too much one from Battle Beyond the Stars, starred by a very young (1980) George Peppard. 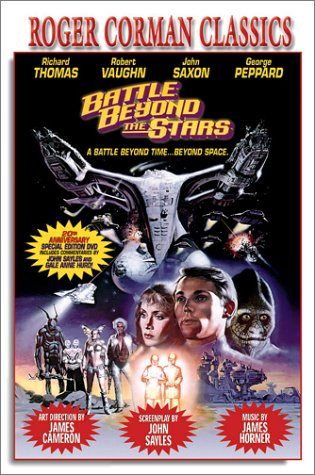 In it, the bad guy threatens a peaceful and defenseless planet, delivers and ultimatum and withdraws(!) his fleet while he allows the population to think the offer, leaving only one ship1. The people in the planet give the only ship they have to the (apparently) most unexperienced youngster they can find so he gets them some help.

The guy leaves, escapes the "blockade" and begins searching allies and finds different oddballs that happen to have spaceships and nothing better to do than fight in another people's war, while at the same time meeting a girl and all of that stuff that usually happens when you wander the infinite space2.

The guy returns home with 5 or 6 allies, the blockader warns the baddie and the battle begins, there are fighting scenes both in space and on the planet, the later inside some kind of bunker caves. At some point a sonic tank forces the defenders to retreat but, by a happy coincidence two of the aliens are twin, psychic aliens who happen to have no ears. They defeat the tank but one (or both?) of them fall.

At this trailer appears the scene above related, but there is not much to see of the tank.

Side note: In Spanish the film was titled "Los 7 magníficos del espacio" (The Magnificent Seven from Space) so I guess there were seven heroes in the good side.

1All the ships are for one or two people, most.

2Except that no giant ape threw barrels at them. 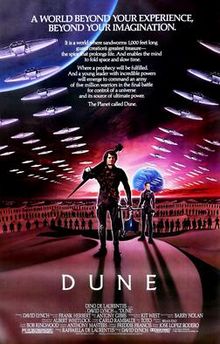 Loosely set in Frank Herbert's Dune universe, this film is set on a desert planet Arrakis (Dune). Paul's family are sent to Arrakis by the Emperor to harvest the drug-like Spice. They have taken this task over from the Harkonnen who already hate the Atreides.

House Atreides have sonic weapons, they have to do something with a voice box type thing on their throats when firing them.

Eventually they are betrayed by the Harkonnen and the Emperor. Paul's father is killed, Paul and his mother escape to the desert and hide in Fremen caves located in the desert.

The Fremen wage war on the occupying Harkonnen with Paul leading them, destroying a lot of the infrastructure relating to harvesting the spice.

Towards the end they blow a hole in the Shield Mountains using Atomic weapons and rides in on sand worms using attacking the Harkonnen and Emperor's troops with the sonic weapons.

At the end Paul fights (and kills) Feyd Harkonnen, notably played by Sting.

Other things that may make the film stand out are:

However it didn't have the tanks described. Have put this as an answer in case the intervening years have added extra details in your memory.

2
Identify a movie from the 80s with a crystal mask and bleeding tree
6
Storyline involving killer robots that harvest legs
5
Looking for a science fiction book: single novel, slow rotation alt earth. Protagonist travels between clans/groups to unite them
10
Book about dolphins with sonar “telepathy”
10
searching story: men in 'tank' living in VR are waken up because of new Ice age coming
10
Sci fi novel where Earth is occupied by a colonial power (alien )
12
Which sci-fi movie/episode had bleeding rocks on a planet?
8
B-class SF horror movie set on post-apocalypse Earth with a group against a killer-cyborg
8
Old horror/scifi/monster movie with a Bigfoot-sized monster that has red vision and attacks a woman through the floorboards
9
Book where the memories/lives of adults are implanted into teenagers