What exactly are the Jedi measuring in the Phantom Menace?

In this clip from the Phantom Menace, we see Qui-Gon take a blood sample from Anakin and have Obi-Wan analyze it for midi-chlorians. From there they get this number: Anakin has a midi-chlorian count of over 20,000.

But what does that mean? Are the Jedi measuring midi-chlorian count per unit volume (whatever that unit is), or are they extrapolating from the small blood sample the total count of midi-chlorians in Anakin's body?

A dupe flag was placed on this question linking the question regarding midichlorian counts and body parts. I thoroughly read the linked question and its answers and was not satisfied that this question would count as a dupe. For starters, the linked question is asking about what would happen to a Jedi's powers if they were to lose their limbs. This is quite distinct from a question asking about a specific scene in a specific movie. Two, the accepted answer to that question does not answer this question. Three, the majority of answers on the question were made before the Disney acquisition and are therefore based on Legends materials. While I did open up to Legends answers, I am primarily seeking Disney Canon answers. Finally, the best answer that does answer this question is based on out-of-universe Word of God (also before Disneyfication) and then extrapolates a conclusion based on that statement. Not quite the level of evidence that I am looking for.

Midi-chlorians are the powerplant of the force.

The unit is per cell... probably, but there's not much canon on this because, frankly, the community hated it more than Jar Jar, and in a fit of competence they just kinda let it go.

Anakin's count was said to be "20,000", however, George Lucas in an interview with Terry Brooks (who was authoring the novelization of Episode One) said “In Anakin’s case, there are, instead of one or two or three midi-chlorians in each cell, there’s like a thousand. It’s unbelievable how many midi-chlorians are in there.” (Source)

Now, of course, there are older quotes where he implies that The Force is "like yoga," and he implies that some aliens are more sensitive to the force because "their brains are different."

George also stated that every single cell needs at least one midi-chlorian, or else it isn't "alive." And we know that we are made out of TRILLIONS of cells, so the "20,000" count cannot be a grand total per body, and just about no organ in the body is composed of only 10-20K cells. So it must be a much smaller division.

Several non-canon (Legends) sources clearly state that the count is per cell.

With great caution and stealth Rhinann had recently arranged to have his own midi-chlorian count tested. The results, carefully shunted and sliced through a plethora of servers and screens around the galactic information hyperlane, had at last come into his possession. As he had suspected, the number was pitifully low: a mere two thousand per cell on average.

Vader knew all about midi-Chlorians, of course-he personally had the highest count per cell ever recorded, more than twenty thousand. More than Yoda, and, he knew, more than his erstwhile Master, Kenobi. 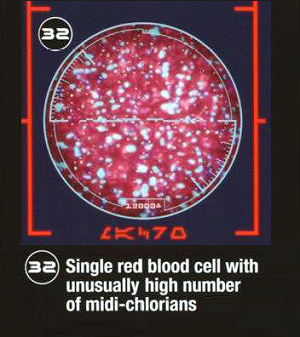 Not the answer you're looking for? Browse other questions tagged star-wars the-phantom-menace midichlorians or ask your own question.