Are there any tools or code for analyzing Arrival logograms?

I've read in several places that Mathematica was used in some of the analysis of the language used in Arrival.

Do the logograms carry any actual meaning as a language, and if they do, are there any tools that can be used for analyzing or generating them? 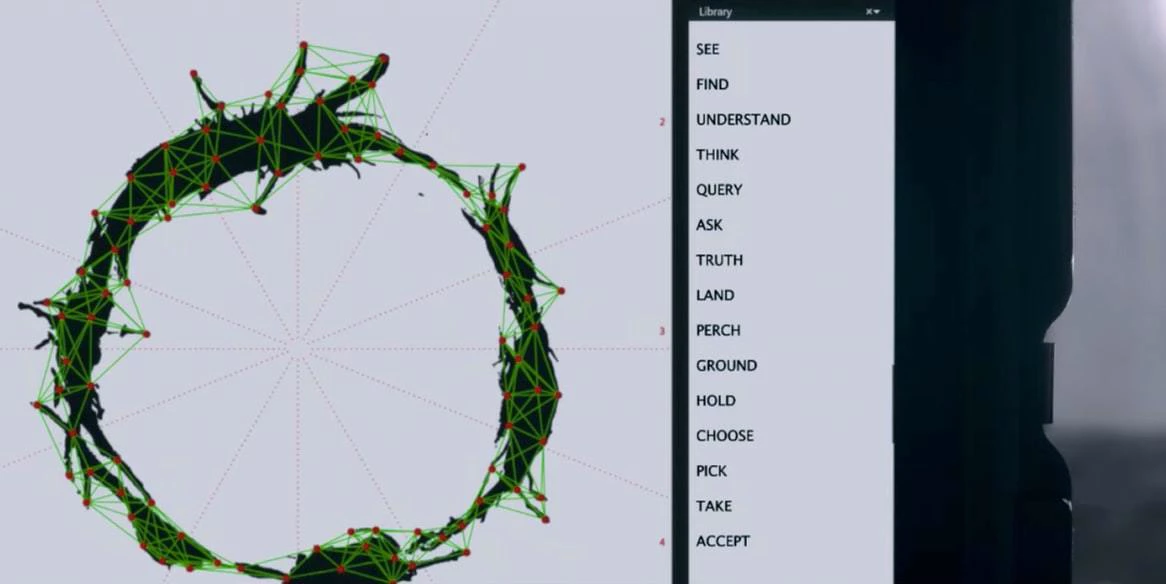 languages behind-the-scenes arrival
Share
Improve this question
edited May 13, 2017 at 21:52

Christopher Wolfram, who was in charge of analysing the alien language, did a stream1 explaining the code he used.

Update: I have contacted the guys at Wolfram Foundations, and they responded. The code for the stream, along with 38 logograms with their meanings, can be found at GitHub, licensed with CC-BY-NC 4.0. I guess I have to retract my previous statement about Wolframs, though they could have made all this more accessible.

1: It's supposed to be available at the link, but it didn't start to play for me. One workaround for this is to create an account, and start a free PRO trial. That way you will be able to download the stream (1.4 Gigabytes).

To summarise, it appears that the logograms were hand-made by the creative team. Certain elements of those logograms have a defined meaning, that they share across different logograms.

Some background information about the creative process

There's a series of tweets by the writer/producer Eric Heisserer, which explain the creative process briefly.

It appears that the alien language was initially bound to be created by Patrice Vermette, the production designer. He was dissatisfied with his own work, so his wife, Martine Bertrand, helped him by designing 15 sketches.

[Vermette's original design] felt too human. Then one night, Vermette’s wife, artist Martine Bertrand, offered to sketch some ideas. The next morning, Vermette came downstairs to find 15 inky logograms on the kitchen table. “I said, ‘eureka.'”
from Wired

Then the creative team made up a dictionary of those inky blots:

Vermette and his team assigned meaning to the inky tendrils that project from each ring, developing a dictionary of 100 symbols.
from Wired

So the actual language was invented without the science:

“We created a dictionary, a logogram bible,” [Vermette] said. “There’s 71 used in the final version of the movie, but we created over 100. They all make sense.”
from Inverse

And then the Wolfram people stepped in and brainstormed how all this could be made to look all sciency:

[Christopher Wolfram's] basic strategy was simple: just ask “if we were doing this for real, what analysis and computations would we be doing?”. We’ve got a list of alien landing sites; what’s the pattern? We’ve got geometric data on the shape of the spacecraft; what’s its significance? We’ve got alien “handwriting”; what does it mean?
from Stephen Wolfram's blag

Here are some pictures apparently showing the code used to analyse the writings and other patterns related to aliens:

According to Stephen Wolfram, Christopher Wolfram (who coded all this stuff) just received the paintings from the creative staff and analysed them like a real linguist would:

The movie-makers were giving Christopher raw data, just like in real life, and he was trying to analyze it.

In the final movie, the screen visuals are a mixture of ones Christopher created, ones derived from what he created, and ones that were put in separately. Occasionally one can see code. Like there’s a nice shot of rearranging alien “handwriting”, in which one sees a Wolfram Language notebook with rather elegant Wolfram Language code in it. And, yes, those lines of code actually do the transformation that’s in the notebook. It’s real stuff, with real computations being done.

There's a related question on Mathematica SE - finding which we owe to @Rand al'Thor - that allows one to generate similar looking stuff. Though it doesn't create the actual logograms used in the film, I'd say they look pretty close: 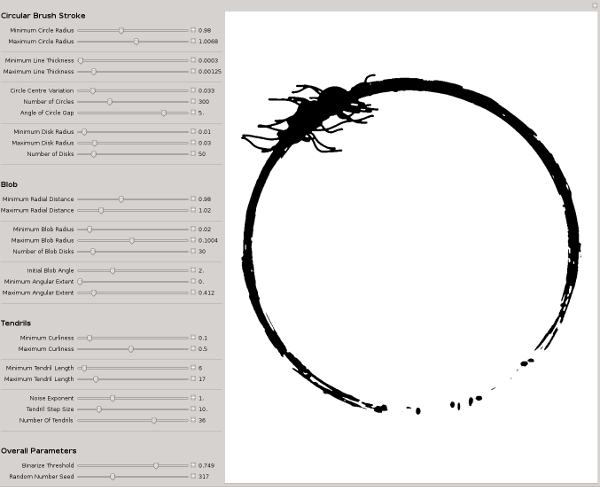 Not the answer you're looking for? Browse other questions tagged languages behind-the-scenes arrival or ask your own question.

7
What does this particular logogram from "Arrival" mean?

8
How can there be different languages with universal translators?
5
Are the Verbis Diablo based on real languages?
19
Lack of translation in Arrival
8
Are any Star Wars languages fully developed and learnable?
18
In what language are the original Jedi texts?
4
What indications are there that there are other Terran languages in common use in Star Trek?