How did the clones know it was Palpatine?

In Revenge of the Sith, How did the clones recognize Palpatine when he made the transmission to execute Order 66? 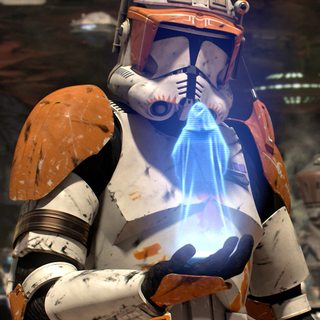 Palpatine was hooded and disfigured, so how did the clones know it was him? Do the inhibitor chips play a role in this or was it a secure communication channel only known by the clones?

The film's official novelisation indicates that the frequency was reserved for Palpatine.

“Yes, sir.” A silent buzzing vibration came from a compartment concealed within his armor. Cody frowned. “Go on ahead, General. We’ll be right behind you.”

That concealed compartment held a secure comlink, which was frequency-locked to a channel reserved for the commander in chief.

That being said, the Clones seem to accept the order from whoever is using the frequency without question, as a result of their training/brainwashing.

A holoscan appeared on the palm of his gauntlet: a hooded man.

“It is time,” the holoscan said. “Execute Order Sixty-Six.”

Cody responded as he had been trained since before he’d even awakened in his creche-school. “It will be done, my lord.”

Not the answer you're looking for? Browse other questions tagged star-wars revenge-of-the-sith order-66 or ask your own question.

17
Why did Palpatine trust so many people with his plan for the Jedi?
11
How and why was the 501st Legion on Mandalore and Coruscant at the same time?
5
Is Cut Lawquane's inhibitor chip activated?
1
Why didn't the Rebels know about the Palpatine transmission?
4
How did Rex know that Palpatine was Sidious?
6
Were the clones originally supposed to be mind controlled?
0
How long before RotS was season 6 of TCW?