I think this was more of a fantasy series, though it was more subtle than The Lord of the Rings IIRC. Set in modern times - though there was some alternate realm thing that was less modern I think.

I read it about ten years ago, I think, and there were a number of books at that time. My brother and I stopped reading it shortly after the main character summoned a small demon somehow who was a bad influence... I think.

It involved a boy who somehow was at some kind of training school/academy. Unsure where it was located, but it needed a classic portal to get to it I think. I clearly remember some scene involving a car driving at specific speeds to get past some barriers. There may have been something about how the school was (slowly) moving or the wards were shrinking... unsure. I don't think it was only magic based, but that was some element of it. The boy had some kind of strange power that made him an incredible fighter, but he wasn't sure how (at least from what I remember). The recordings of him training just showed a white flash I think. I remember some scene in an elevator going down to the training floor where he went to a level below some adult with him.

There was something else about him joining a group that had twelve members, one for each month, whose powers grew and lessened based on how close the date was to "their" month.

Oh, and there was something about him looking for his mother I think? Perhaps in another "realm"?

Any help is appreciated!

This sounds a lot like the The Tapestry by Henry Neff, a five-book series about the adventures of an unusual individual named Max McDaniels. The books are The Hound of Rowan, The Second Siege, The Fiend and the Forge,The Maelstrom, and The Red Winter.

Most of the plot points you mention seem to come from The Second Siege. 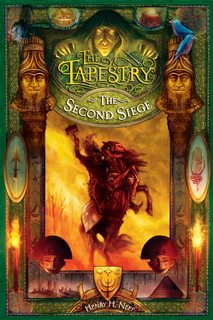 When chores do stack to sap my strength And wee small wants do plague my heart, I call upon a friend so true, a friend who grants my soul’s delight. Upon this eve I summon you, the mild-mannered Mr. Sikes.

The stones began to glow, flickering to life as reluctantly as an old lightbulb. There was the distant sound of a clock chime and a sudden flash of light. A moment later, Max found himself blinking at an elfin creature no taller than a candle.

“A bad influence” may be underestimating things a bit: Mr. Sikes likes to engage in a bit of possession on the side.

“What?” said Dr. Rasmussen from where he hugged the floorboards.

“The exit velocity!” snapped Cooper. “To get through the barrier.”

“Three hundred kilometers per hour,” croaked Dr. Rasmussen. “You must be very precise!”

“What does Peter have to do with anything?” demanded Max. “Where is she?”

“She is far,” said the Demon, his voice fading to a silken whisper as he leaned close to the circle’s perimeter. “Far away, Max McDaniels. You must find the Book of Thoth before ever you find her. And as for Peter, well, he has only one eye on the future, does he not? A poor man’s prophet, I fear. Cassandra would be shamed. Max, your mother sought the Sidh on a fool’s errand for which she has almost paid in full.”

“I thought these things were reserved for the Red Branch,” replied Max, finally glancing back at the weapon. “I’d have to be a member, and you said there can be only twelve.”

“That’s true,” said Vilyak quietly, “but one among our ranks is retiring—too old now to be of creditable service. You are young, Max, but I have never seen one so gifted. You have already been blooded. Extraordinary times may necessitate exceptions, wouldn’t you agree?”

13
YA series about magical cats which have some kind of ability that involved seeing strings
9
Looking for title of TV series about boy and an alternative world
6
Fantasy novel involving a painter
10
Young-adult science fiction novel series. Kid trained as warrior, all other kid warriors wiped out
4
Identify a young adult novel involving gates or bridges and a troubled boy
15
Looking for a fantasy series with ferrets, elves and a foul mouthed dwarf
9
Young adult fantasy/scifi novel about Ancient Egypt
6
Cartoon series with Infinity gauntlet-like worn by a teenage boy
5
Book or series about stones and a magician named Gwydion
13
Book series about a boy who becomes a wizard's apprentice and can see magical auras