This has always bugged me.

In Terminator 2, it is made clear that the terminator that came in the first movie resulted in a changed history, with Skynet being developed at a faster rate by Cyberdyne systems based on research they did on the terminator arm and chip.

This plot point is emphasized during T2 when they blow up Cyberdyne systems, and at the end where Arnie must destroy himself to prevent the same thing from happening.

But the "Uncle Bob" Terminator had to break off his lower arm in some machinery after a tussle with the T1000. Why then were they so oblivious to the arm he left behind in the factory? Why was it not mentioned in any subsequent films?

My source didn't mention why the scene was left out of the movie, but according to Randall Frakes novelization of the film, John tossed the crushed arm into the vat and destroyed it.

I found this reference while watching the Extreme Interactive Mode with Graphic Commentary and Rare Behinds-the-Scenes Footage included in the special features menu on the T2:EXTREME DVD

Terminator's crushed left forearm is still stuck in the chaindrive...a point addressed in Randall Frakes novelization of the film... by having John later retrieve it and toss it into the molten pit as well.

Then John remembered Terminator’s other arm back down the row of smelters, and ran to get it. It was a pile of useless, twisted metal, but the metal was from the future and this time they weren’t leaving anything to chance.

When John tossed the pieces in, one by one, he and Sarah felt a shudder deep within the bowels of the earth.

The crushed arm would likely have been discarded as scrap. The shattered forearm and hand were mangled and left snarled in the gears of a machine in a foundry. The worker who found the mess would likely prise the metal out of the gears to get them turning freely, and then move on to other tasks. Superintelligent machines would not be on his mind.

On the other hand, at the end of The Terminator, the crushed head, arms and torso of the T800 were left behind in a highly mechanized factory. The parts would have been crushed, but they would not look like mere scrap metal to the people who worked there. They would be set aside and examined, and once their unique properties were discovered, off we go on an expedited path to Judgment Day.

The left over android arm might advance the material sciences, robotics and/or prosthetic industries. But without the CPU, the computer science advances needed for the development of Skynet were left unaccelerated.
Ultimately, the arm made little impact in the overall story, possible until such time as Skynet was already active and on its killing rampage. At that point the arm may have contributed to the development of the T800 endoskeleton, but who would have been keep track at that time?

There was an image on the Terminator 3 website that implied that they had recovered the arm and were adapting technologies to use it. I had to do some digging to find the image but I found it at: 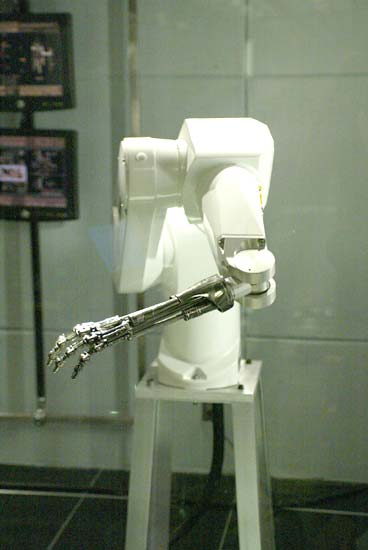 Why this wasn't in the movie (I only saw theatrical version) I don't know.

Well....it did actually kinda-sorta come up. Before T3 came out were the series of novels by S. M. Stirling (in my opinion superior to all the post-T2 movies).

Short version, secret spy military guy Tricker grabs the two guys in charge of Cyberdyne and says right, you lot screwed up, this can't happen again, I let you have freedom before to build your silly little company and look where that lead. Here's a new arm and now you live in this bunker and study it.

The arm, as a nice detail, is superior to the old arm as they only managed to recover the forearm-forward from the T1 terminator. But the T2 terminator had his arm ripped off at the shoulder. So not only did they have more, but more complex parts too- the range of motion necessary to a shoulder socket, how the "tendons" in the forearm connected to parts along the upper arm, etc.

Personally, my head-canon is that the arm that Uncle Bob leaves behind is what splits the Terminator franchise into two after T-2:

It makes sense seeing as Judgement Day is further away in SCC than in T-3, and the fact that SCC is an alternate timeline.

As for why they didn't mention the arm after T2, it was most likely an oversight or intentionally left alone to not repeat what T-2 has already done. In-universe, we don't see what they did after the T-800 is destroyed, but one of the novels states that John takes the arm and throws it into the molten pit as well.

4
Why did the T-101 model allow Sarah Connor to terminate it?

43
Why was the first Terminator rotting?
9
When was Cyberdyne Systems created in the original timeline and by whom?
11
How does time travel really work in The Terminator Universe
11
Does Terminator 3 undermine the 'No Fate' concept?
11
Why did Sarah Connor and her friends stockpile a hand held minigun?
7
What happened to the chunks of Terminator that didn't get crushed?
9
Can a Terminator feel affection?
31
Was the T-800 certain it had the right Sarah Connor?
3
How did Kyle Reese know that the T-800 was Arnold when his back was turned in the dance club?