I am French, although I now live in California. As with many other things in those days, there was no serious rival to 1940s-70s American SF.

I'm trying to find the reference of a short story I had read as a teenager and which made a strong impression on me. The story takes place in a small American town - probably in the Midwest - in the 1950s. After doing some reconnaissance, an advanced alien invasion team, composed only of a few operatives, lands discreetly near the small town, and stays hidden. They are here to conquer the earth. But the only thing they do is cut the power grid of the town, close to sunset. Little by little, the tonwspeople, fraught by fear and mutual distrust start freaking out, and before you know it, the whole town is in chaos and quasi civil war. In the end, the alien leader says triumphantly to his deputy : "see, I told you this all we had to do. This is a very fearful and irrational race".

Now the parable is obvious, particularly in the context of the nascent Cold War and the Red Scare (by the way, the invaders could have been Russians, but I believe they were aliens). And one could see some reminiscence of the current context, that's why it came back to my mind...

Does anyone know what story I'm talking about ?

Thanks a lots for your help, merci beaucoup :) Vinz

This sounds like The Monsters Are Due On Maple Street, a classic Twilight Zone episode.

Maple Street is full of playing children and adults talking and doing chores when a shadow passes over, accompanied by a roar and a flash of light. Several adults are slightly alarmed by this, but they carry on with their activities. Shortly afterwards, the residents discover that their power has been cut, affecting stoves, lawn mowers, and phones. They gather in the street to discuss the situation. Pete Van Horn volunteers to walk over to Floral Street, the next street over, to see if it is affected as well. His neighbor, Steve Brand decides to go into town, but Tommy, a local boy, urges him not to leave the street. Tommy has read a story of an alien invasion causing similar controversy, and says that the monsters do not want anyone to leave the street. Furthermore, in the story, the aliens are living as a family that appears to be human. The power outage is meant to isolate the neighborhood.

At first, Tommy's theory is laughed off, until another resident, Les Goodman, tries unsuccessfully to start his car. He gets out and begins to walk back to the other residents when the car starts on its own. The bizarre behavior of his car makes the neighbors suspect that Les may be an alien, as suggested by Tommy's story. One woman brings up his late nights spent standing in the garden looking up at the sky. Les claims to be an insomniac. Steve, acting as the voice of reason, tries to defuse the situation and prevent it from becoming a witch-hunt. Charlie Farnsworth pressures Steve about his hobby building a secret ham radio. Steve argues that the whole idea of anyone on the street being an alien is madness.

Darkness descends and a shadowy figure is seen walking toward them. Charlie panics, grabs a shotgun, and shoots the figure, thinking it to be an alien. When the crowd reaches the fallen figure, they realize it is Pete van Horn, returning from his scouting mission on Floral Street, instantly killed from the bullet. As Charlie struggles to defend his hasty action, the neighbors voice suspicions that Pete had discovered evidence that Charlie is an alien, and Charlie shot Pete to prevent him from fingering him. The lights in Charlie's house come on, further fueling their suspicion, and even Steve is too angered by Pete's death to defend Charlie. Charlie makes a run for his house while the other residents chase him, hurling stones, one hitting Charlie in the forehead, creating a bleeding gash. Terrified, Charlie attempts to deflect suspicion onto Tommy. Several neighbors agree, as Tommy was the only one who knew about the aliens' plans.

Lights begin flashing on and off in houses throughout the neighborhood; lawn mower and car engines start and stop for no apparent reason. The mob becomes hysterical, hurling accusations, smashing windows and taking up weapons as the situation devolves into an all-out riot.

The scene cuts to a nearby hilltop, where it is revealed the shadow that flew overhead is, indeed, an alien spaceship. Its crew are watching the riot on Maple Street while using a device to manipulate the neighborhood's power. They comment on how simply fiddling with people's electricity consistently leads them to descend into paranoia and panic. They also discuss their intention to use this strategy to conquer Earth one neighborhood at a time.

It looks like there was a book version of it and the short story adapted from the show showed up in several collections. 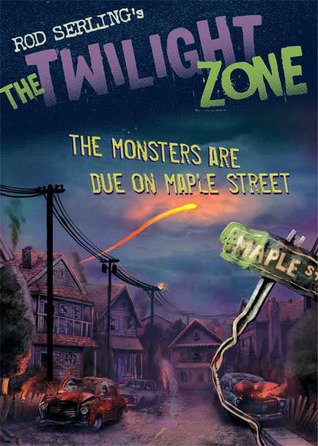 The episode is also available on Vimeo.

8
I am trying to track an Asimov short story in black-and-white
9
SF Story identification, short story published 1940s, 1950s, immortal Neanderthal
20
Trying to track down a sci-fi story about Venus
2
1950s short story: alien ship and vampires
14
1950s Short Story - Naive Aliens
13
Pre-80s short story, man walking in a deserted town enters a cafe and climbs down a pit with cables and pipes
18
Trying to find short story about somebody who knew everyone on Earth
12
Short Story/Novella in Which People Living in What they Think is Small Town Fifties America Find Look Magazine and Don't Recognize Anything in It