Where was the Chancellor's office located in the Senate Office Building?

The great question about whether there were any witnesses to the duel between Darth Sidious and Mace Windu made me thinking about the location of the Chancellor's office...

The Senate Office Building was a dome-shaped office building located close to the Senate Building on Coruscant. Among many offices it also contained the Chancellor's office which, according to Wookieepedia, was located near the top of the building.

However, if we take a look at a cutaway taken from Star Wars: Complete Locations, we notice that the exterior walls of the office are straight vertical. This shouldn't be possible on the top of a dome-shaped building. 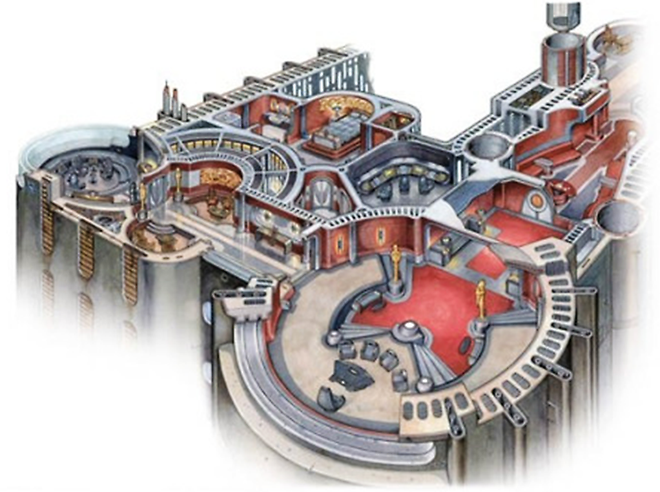 In addition, in the scene from Revenge of the Sith where Windu's lightsaber fell down from the office window, the walls appeared to lead almost straight down.

Of course, it could be said that the scene was taken from the very end of the lightsaber fall, close to the street level. But in that case, shouldn't we be seeing only the lower floors of the surrounding buildings?

So, was this a movie mistake or was there possibly a straight vertical structure on the other side of the Senate Office Building that we just cannot see? In my opinion, regarding to these observations, the Chancellor's office could not have been located on the top of a dome-shaped building.

IMHO it is possible that the floor plan of the Senate office building may resemble a keyhole. It may have a cylinder attached to a rectangle or something.

Thus at least one section of the Senate office building could have windows in a vertical wall thousands of feet high.

I thought that ground level on Coruscant was supposed to be miserable slums and shut off from light by miles high buildings. But the picture of the Senate building is all in full light and seems to have a flat paved area leading to a large doorway. So possibly important people are supposed to enter the building there and thus the level is probably not ground level in the slums.

The Republic Executive building was built after Naboo. Since it's main window has no view of the Senate dome any of the three compass directions in a 360 degree layout. While the building is a Dome it's massive size doesn't mean it's perfectly smooth circular. The building is nearly a kilometer in diameter. So broad curves aren't visible except at distance. The dome up close also has numerous grooves and tiers on it's surface to have vertical and horizontal floors for his office layout. 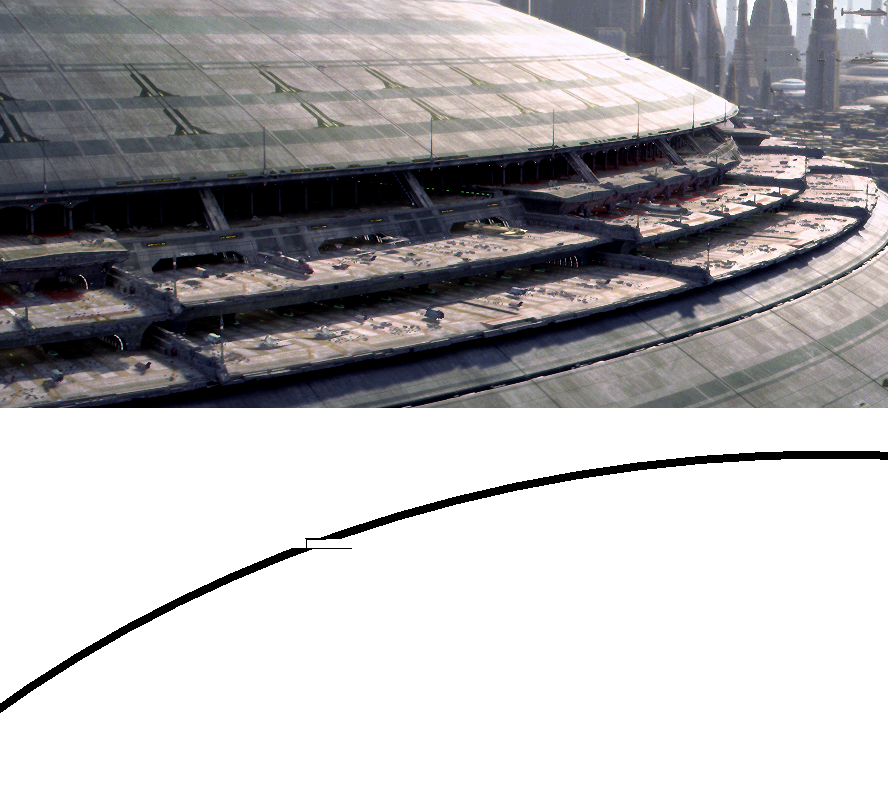 25
Did anyone on Coruscant see/film the duel between Mace Windu and Chancellor Palpatine?

23
Is it “the Jedi way” to kill a defenseless being if they pose a sufficient threat?
5
How was Commander Cody's full body being projected on Darth Sidious' office table when there was no camera?
3
Where is Athiss located?
4
Members of the Galactic Senate
9
Where is a droid's brain located?
16
Where is Vader's fortress located?
25
Did anyone on Coruscant see/film the duel between Mace Windu and Chancellor Palpatine?
11
What happened to the Separatist Senate at the end of the Clone Wars?
7
Where was Luke's Jedi Temple/Academy located?
28
Why didn't anyone in the Galactic Senate raise a motion against the formation of the Empire?