Is there a difference in the Red Hulk's and Green Hulk's powers?

I get that the two Hulks are different characters, but is there a difference in the Red Hulk's and Green Hulk's powers?

Yes, there are important differences between the two characters despite their similarities.

At the basic level, both the Red Hulk (former General Thaddeus "Thunderbolt" Ross) and the Green Hulk (Dr. Bruce Banner) are very similar. They both have vast superhuman strength and are arguably two of the strongest mortals on Earth. They have an incredible rate of regeneration, and superhuman resistance to injury. Both have shown near-complete invulnerability to weapons of human origin. Both have shown the ability to fight metahuman opponents of vast power and have fought and defeated some of the most powerful beings in the Marvel Universe.

Where they differ is how they increase their strength past its already amazing limits:

Where they differ is the amount of radiation output both generate. While the Green Hulk always generates a certain amount of gamma radiation, the Red Hulk's energy output is significantly higher. It was discovered by the Green Hulk the more the Red Hulk fought, the hotter he became. When he reached a certain heat threshold he became disoriented and vulnerable.

From the Marvel.com wiki: Hulk uncovered Red Hulk's condition of the angrier he gets, the hotter he gets, and guessed it could be a weakness. Hulk let his opponent strike him repeatedly until the heat became too intense for the Red Hulk. He became unbalanced, and Hulk was able to finish him off quickly. 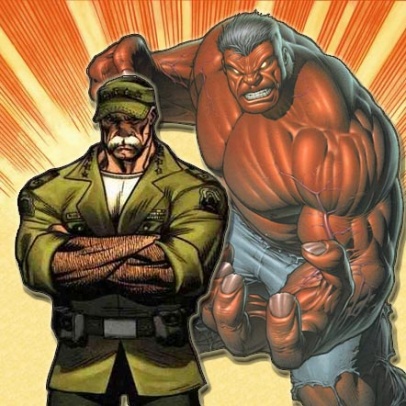 One of the other major differences is the temperament and combat skill of the two characters. Where the Green Hulk was a scientist trapped in the body of a monster, the Red Hulk was a soldier with the powers of the Hulk. The Red Hulk's sheer aggression, dominant personality and combat experience made him a far more dangerous opponent than the Green Hulk has appeared in his history.

In addition to what Thaddeus stated the biggest difference is Red Hulk can absorb cosmic energy which means he would pose a serious threat to Thanos and other high level cosmic beings :

Energy Absorption: Red Hulk is capable of absorbing energy[16]. He said in his confrontation against the Hulk and his Defenders that he absorbs energy, more gamma, but that he has a real taste for cosmic power. He has also absorbed (and taken for himself) the Silver Surfer's power cosmic, leaving him powerless on the ground while Red Hulk flew away on his board.[17] However, overuse of this power left Red Hulk unable to revert to his human form.

16 According to Tom Breevort, Rulk beat the Odin-powered Thor by drawing on Thor's own power: "Finally, we've seen it established that the Red Hulk is fueled by cosmic energy, and what is the Odinpower if not a form of cosmic energy? So during their battle, it's likely that the Red Hulk was drawing on Thor's own power to fuel his fighting strength. Brevoort's QA

Not the answer you're looking for? Browse other questions tagged comics marvel the-incredible-hulk or ask your own question.

3
What turns the Hulk red?
8
Is the Red Hulk's radiation intense enough to harm people?
6
Who is the most powerful character Hulk has defeated ever?
7
What happens if you manage to steal the Silver Surfer's board?
3
Why does the Red Hulk stay as the Red Hulk?

3
What turns the Hulk red?
24
Why is the Hulk's skin green?
9
Could the Hulks procreate?
3
Why does the Red Hulk stay as the Red Hulk?
8
Is the Red Hulk's radiation intense enough to harm people?
7
Can hulks be shut down psychically?
8
How would the Hulk's transformation affect an artificial joint?
6
Does The Hulk's anger have a limit?
29
Why aren't more Hulk-like beings being created?