Do battle droids ever “rank up”?

Note: Feel free to correct me if I'm getting the hierarchical order wrong. It's hard to tell which droid model is "better" or simply a different specialization.

I'm thinking from the ground up, wondering if a regular B1 has ever been promoted to a new type, such as becoming a pilot or OOM commander droid after surviving x amount of battles, or proving that they're either glitch free or that their glitch is useful, and then possibly their "consciousness" transferred to a B2 and beyond. I know B2s aren't as smart(1), but they are much stronger and more durable, so this could be seen as an improvement from a robot's perspective.

One droid in particular that was able to quickly adapt to an unscheduled change in development comes to mind as a potential candidate for immediate advancement.

So has this ever happened? If not, does any system for personal battle droid advancement even exist?

(1) At least initially. If fitted with a previously proven "brain", the tactical function of a B2 could see an improvement, and would make this kind of system make more business sense. 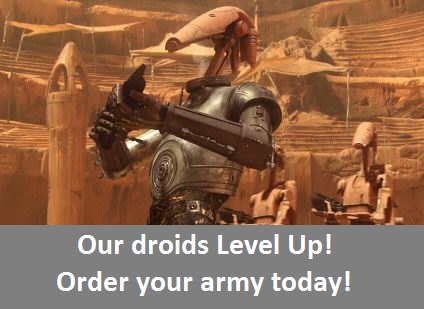 We don't have any canon evidence that I know of of a droid being reconstructed into a different type of droid; however, we know that B1 battle droids can be promoted, and that droid behaviour can change with experience over its lifetime (unless its memory is wiped).

In the first episode of the Clone Wars tv series, a group of battle droids in tanks are fighting Yoda. Yoda cuts his way into one of the tanks and starts destroying the droids, and we watch the tank commander saying "But I...just...got...promoted!" before being pulled down into the tank and (presumably) destroyed.

Whether there was any improvement in programming when a battle droid was 'promoted' is unclear.

The droids themselves can rank up gaining new ranks but never in canon (nor as far as I'm aware in legends) it is ever mentioned that a droids consciousness can be transferred to another droid.

For the 1st ranking up method: Droids sometimes called another one sergeant during the clone wars and we even saw an unsuspecting droid suddenly getting assigned as ship commander (most often when Griveous had to go to attain other matter....aka run for his live).

For the 2nd I have to say it is unpractical even if it were possible. The droid armies owners did not think much about droids. They were tools nothing more. And them developing their own personalities was not considered as a boon (there were a few discussions on stackoverflow about r2 and c3po why they didn't get memory wipes time and again and in essence....because they were liked by their owners and seen as persons not tools like most other droids were). Thus transfering even an experienced droid into another body wouldn't do much. The experience could be programmed in into the other chassi anyways (and thus not only into one body but hundreds of them). While the personality was never seen as a boon.

So aside from it possibly being impossible (no canon information existing there) it is also the case that there was no real reason to even do it (it would cost money and upgrade at most 1 single droid and not hundreds what a few dozen hours of programming would do).

Not the answer you're looking for? Browse other questions tagged star-wars star-wars-legends droids or ask your own question.

9
Where is a droid's brain located?
8
Star Wars Droid Personalities