Old story where Santa Claus is a 007-like secret agent?

In this one, the protagonist is Santa Claus (goes by Kris), who also happens to be an extremely talented - and deadly - secret agent. I believe he spends most of his the year sleeping in suspended animation to stay young, and is only woken up in times of dire emergency (or Christmas). As silly as the premise sounds, I don't think the story was a parody. I remember it feeling it was intentionally a little over-the-top (extra macho, etc.), but nothing approaching being a spoof or camp. At least as best that I can remember.

The story opens with Kris being woken by whatever agency employs him, telling him they have a serious issue that requires his services. I don't recall the organization, or the bulk of the story. I do remember Santa has lots of gadgets, and dispatches a number of enemy agents with great efficiency with them.

The story comes to its final act with Santa locked in a death struggle with the leader of then enemy organization. As expected with the theme of the story, the leader is a beautiful femme fatale. I think she may have been a perceived friend at some point in the story, and turned out to be treacherous. At any rate. She pulls a gun on him and they fight for it. Neither can gain the advantage, and Santa realizes he can't get the gun away from her. He ultimately prevails, in a method that I recall being both controversial, and keeping in theme with the macho super-agent trope of the story.

The story closes with an exhausted Kris/Santa returning home to his sleep chamber to get some rest. I think there's a line at the end about checking on the elves in a few months. Not sure about that, though.

I read this one in one of my dad's old sci-fi magazines. I'm going to guess mid-70s at latest. I can't remember the particular magazine, but I do remember the cover. The cover picture has a ferocious looking Santa incinerating some bad guy with a miniature flame thrower. The art had a "colored pencil" quality to it. 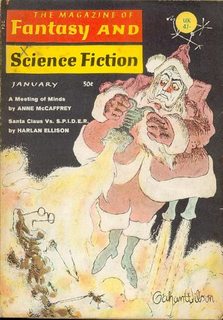 Synopsis from this review:

What if Santa Claus were a real person, of strange and mysterious origins, and the Christmas gig was only his cover for his real activities? This story follows Santa from half-past September through his 007-style mission to save the world from S.P.I.D.E.R. , a hilarious romp through satire and wild imaginings to an ending that leaves you laughing. You'll never think of Santa Claus the same way again.

Not the answer you're looking for? Browse other questions tagged story-identification santa-claus or ask your own question.

11
Name of a YA sci fi anthology?
22
A convicted soldier serves his time and builds a new unit
7
How old is L. Frank Baum's Santa Claus?
5
What's the graphic novel where the boy learns his grandfather is Santa Claus?
14
Looking for a humorous short story about the ultimate secret agent
13
Science fiction novel with forced sex change
8
Short story/radio play where Santa is an Alien